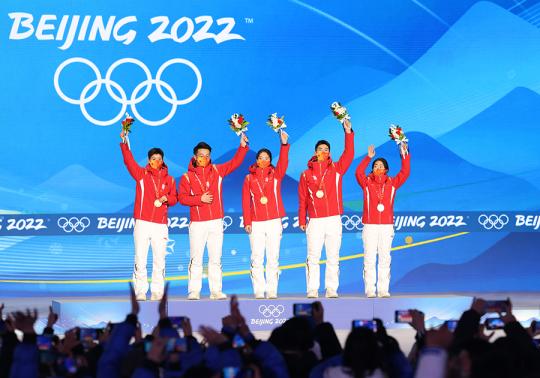 Throughout the 2022 Beijing Winter Olympics, the performances of many Chinese athletes have captivated and inspired the nation.

On social media platforms, netizens have heaped praise on and shown support for their favorite athletes, medalists or not, who have demonstrated the Olympic spirit by challenging themselves and never giving in.

While the success of freestyle skiing prodigy Gu Ailing, a dual gold medalist, seems unattainable to most Chinese, many said they could better relate to and were more inspired by veteran champions like Fan Kexin and Xu Mengtao.

Fan and Xu's demonstration of persistence, confidence, and never-say-die spirit at the Games and their humble family backgrounds have prompted many Chinese people to pursue their own dreams through hard work, they said.

Although Xu and Fan have each won multiple world championships, their quests for Olympic gold were not smooth journeys.

Xu, 31, won gold in the women's freestyle skiing aerials on Feb 14 after finishing sixth at Vancouver 2010, winning silver at Sochi 2014 and finishing ninth at Pyeongchang 2018.

Both champions are from less privileged backgrounds. Fan's parents used to run a shoe repair shop in Qitaihe, Heilongjiang province, while Xu's family had to make a living from a barbecue stall in Anshan, Liaoning province, according to local media reports.

Fan's family moved to Qitaihe from Boli county, Heilongjiang, when she was in primary school after they went into debt due to a business failure. They only had 300 yuan ($47.4) and rented a six-square-meter warehouse, where they lived and repaired shoes, Heilongjiang Daily reported.

Fan gave up dancing due to the relatively high costs of training, and was selected by her first ice skating coach, Ma Qingzhong, who promised to not charge any fees as long as she worked hard.

In an interview with China Central Television, Fan said when she first started ice skating, her family could not afford a pair of skates, which cost 2,500 yuan－almost the whole family's living expenses for a year.

She said she put a lot of pressure on herself as she wanted to achieve good performances and improve her family's living conditions.

After winning bronze in the women's 3,000-meter relay on Feb 13, Fan kissed the rink, a moment that touched the hearts of many people and quickly became a trending topic on the Sina Weibo micro-blogging platform.