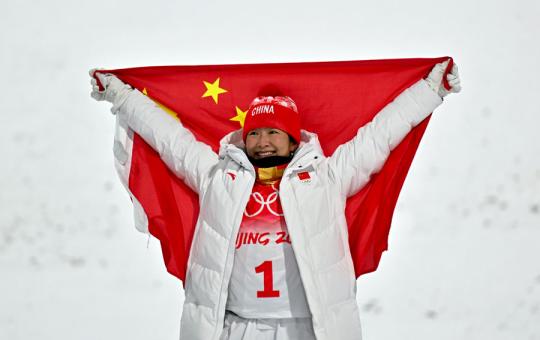 "I kissed the ice because I love short track so much," she told reporters. "I love the event we were competing in. Thanks to everything, thanks to the competition, my teammates and the rink."

"I immediately cried when I saw her kissing the ice," said one netizen.

Another said: "The Olympics are much more than gold medals. All the efforts and persistence shown by the athletes are worthy of respect."

For Xu, there have also been emotional moments. "Have I won? Have I won?" she screamed repeatedly after winning gold in the women's aerials.

"I just wanted to do the best tricks I could and I did it," she said. "I'm super excited about winning the first gold medal in women's aerials for China."

Xu was chosen as a flag-bearer for the Chinese delegation at the Games' closing ceremony on Sunday.

She started to practice gymnastics at the age of 4 and transferred to freestyle skiing at 12. Her sports career has been accompanied by many injuries. Ligaments in both her legs have ruptured twice, necessitating four rounds of major surgery.

Her father said Xu often helps run errands at the barbecue shop after training, even after winning many world championships.

Xu told Netease News that her parents are her biggest motivation. "I want them to live a better life and not need to work so hard, so I just kept telling myself that I need to train hard," she said.

Xu has also become a fan favorite on social media platforms. Hashtags about her winning and videos of the hardships behind her success garnered hundreds of millions of views.

No one can achieve success easily, Beijing Evening News said in an editorial, noting that Xu's gold medal was achieved through persistence, determination, overcoming injuries and never bowing to hardships.

Her success has transcended sports, and her story will motivate more athletes and ordinary people to pursue their own dreams, it said.