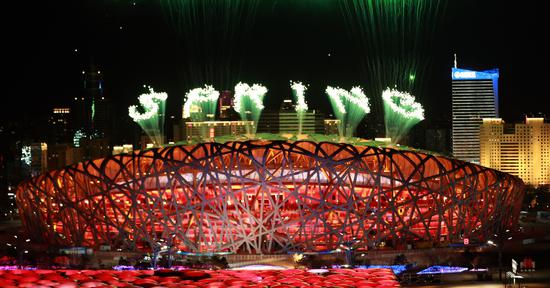 Fireworks illuminate the night sky during the opening ceremony of the Beijing 2022 Olympic Winter Games at the National Stadium in Beijing, Feb. 4, 2022. (Photo/Xinhua)

The barrage of fireworks that lit up the night sky above the National Stadium during the opening ceremony for the 2022 Beijing Winter Olympic Games on Feb 4 not only presented splendid images, but also showcased state of the art technologies and environmental awareness, industry insiders said.

"The chemicals used to make fireworks do not have heavy metals and contain low sulfur," he said.

Li Chuang, president of Shenggu Fireworks Manufacturing Company in Hebei province, said that compared with ordinary fireworks, the ones used for the opening ceremony reduced pollutants by about 70 percent.

"No residue was left when the fireworks burned out in the night sky," he said. "The Winter Olympic Games required that the event be 'green', and we were so glad that we could contribute to an environmentally friendly Games.

"The reason why no residue was produced was that we adopted the technology of 'slight-smoke fireworks', which produce less smoke and waste while burning. A new type of slight sulfur chemical was also chosen as one of the raw materials to produce the special luminous component of the fireworks."

Li said the amount of fireworks burned was just 10 percent of those used for the 2008 Beijing Summer Olympic Games.

"High technologies have been used to produce the eco-friendly fireworks," Liu said. "We tried countless times to finally decide the layout and the angles for arranging the fireworks to show the patterns perfectly."

For example, one of the displays, the English word "spring", covered an area of 150 to 200 square meters. Liu said many factors could affect the firework patterns, such as the shape of the launching device, the burning speed of the chemicals, and the perpendicularity of the launch.

"The perpendicularity should reach 99 percent and above, and Beijing's strong winds and cold climate should be taken into consideration to show the best effect," he said.

Zhong Ziyuan, technical director at Dancing Fireworks Group, said the research team used 3D technology to design drafts on computer, and then improved the drafts through numerous experiments so that the height and inclination of the fireworks presented the best show.