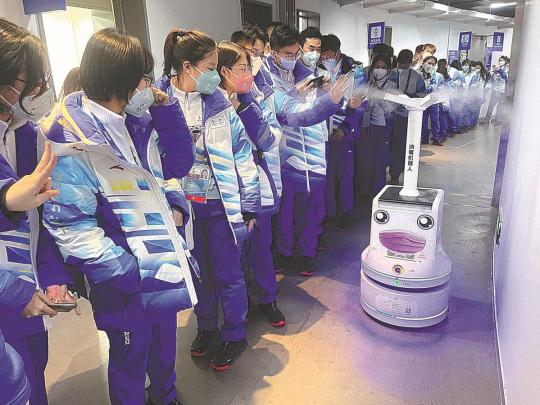 Staff members at the National Stadium in Beijing are attracted by a robot powered by artificial intelligence that cleans and disinfects Olympic venues. (Photo provided to CHINA DAILY)

Digitalization showcased as new standards set for the future

An icy river in Beijing was the setting for a special Olympic torch relay as an amphibious robot shaped like a curling stone held a metallic red-and-silver torch.

The robot slid along the ice before plunging into an unfrozen area of the waterway, with the flame burning well underwater as it was passed to another robot.

The second torch was swiftly lit, completing the first-ever robotic underwater Olympic torch relay. The entire process took about eight minutes, with the second robot successfully emerging from the water to pass the torch to a human bearer. The first robot and torch were later recovered from the river.

The futuristic torch ceremony, which took place earlier this month, is just one example of the use of cutting-edge technologies at the ongoing Beijing 2022 Winter Olympics.

The Chinese capital, the first city in the world to host the summer and winter editions of the Games, has come up with innovative high-tech standards for Beijing 2022, delivering China's promise to hold a "simple, safe and splendid" event.

The city has gone to great lengths to make the Winter Olympics a smart sports experience.

These efforts include a breathtaking display of artistry mixed with technology at the opening ceremony, robot chefs cooking meals for athletes, cabins offering journalists high-tech power naps, and self-driving cars and smart navigation supported by augmented reality and artificial intelligence, or AI.

Thomas Bach, International Olympic Committee president, said on Feb 6 that the Beijing Winter Olympics have made history by achieving an unprecedented level of digitalization and have set new technology standards for the future.

He made the comments while interacting virtually with journalists at a news center in Beijing through holographic communication technologies developed by Chinese tech company Alibaba.

According to the IOC website, the virtual interaction, supported by a range of sophisticated technology, was projected onto a remote high-definition screen, generating a true-to-life hologram effect. All details were reconstructed in high definition, including detailed facial expressions and the texture of clothing.

Bach said Chinese companies are playing a crucial role in transforming the Olympic Games and leading them into the digital age.

A wide variety of technological applications is on show at the Games as Chinese companies, including heavyweights and startups, constantly experiment with novel ideas and new technologies.

For example, the space giant China Aerospace Science and Industry Corp was responsible for developing the special torches used in the underwater Olympic relay.

The company said that compared with underwater torches overseas that use solid fuel and whose flames cause pollution, those for Beijing 2022 use gaseous fuel that is smokeless and causes no pollution. Numerous design obstacles were overcome to achieve this.

Tian Qiyan, associate research fellow at the Chinese Academy of Sciences' Shenyang Institute of Automation in Liaoning province, who oversaw the project, said the robot relay was also supported by the latest high-precision underwater hovering and positioning technologies.

"Ensuring precise docking between the two robots in icy water, and igniting the second torch's flame under the water, were the biggest difficulties for the handover－comparable to those for the docking of spacecraft," Tian said.