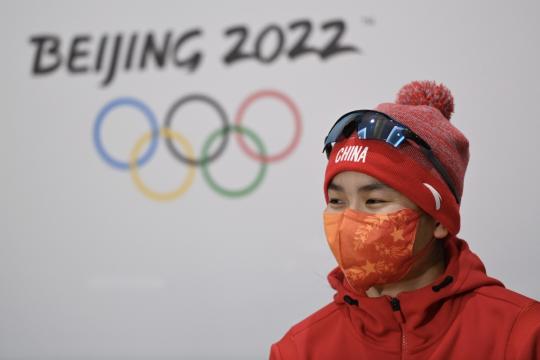 China's national cross-country skiing team is one of the most ethnically diverse among all national teams at the Beijing 2022 Winter Olympics. It not only has athletes from Northeast China, the traditional cradle of Chinese winter sports athletes, but also from South China, where snow isn't as common as in the north.

Furthermore, it also has members from different ethnic groups, including Tibetan, Uygur, Kazak and Han. Such diversity has made the team even more united, athletes said.

"Of course, we have different customs, which we often discuss with each other. My teammates from other ethnic groups are very good at singing and dancing, while they find my Northeast China dialect hilarious," said team member Shang Jincai, who competed in four men's events at the Beijing Games.

"We really enjoy each other's company. In fact, we are just like real brothers."

For the first time, the team of six male and six female cross-country skiing athletes qualified for all 12 events at the Winter Olympics.

Ciren Zengdui from the Tibetan ethnic group is the youngest team member. He is also the first athlete from the Tibet autonomous region to compete at the Winter Olympics.

The 18-year-old first trained as a mountain climber. Because of his passion for snow sports, he started to train as a cross-country skier in September 2018.

"Although my performance wasn't quite good, I am so proud to be the first athlete from Tibet to represent China at the Winter Olympics," Ciren Zengdui said after finishing 63rd in the men's 15km classic event on Friday.

Another men's team member, Hadesi Badelihan of the Kazak ethnic group, is from the Xinjiang Uygur autonomous region.

Among the women members, Uygur athlete Dinigeer Yilamujiang was in the spotlight after she helped to light the Olympic cauldron at the opening ceremony of the Games on Feb 4. She has competed in three events at the Beijing Games. Like her teammate Bayani Jialin from the Kazak ethnic group, Dinigeer is also from Xinjiang.

Bayani was among the four athletes taking part in the women's 4 x 5km relay on Saturday. The team finished in 10th place, which was a breakthrough for the host country.

Team China has made rapid progress in cross-country skiing in recent years. The sport used to be limited to a few dozen athletes in northeastern China, as winter sports can take advantage of cold winters in the three provinces of Heilongjiang, Jilin and Liaoning.

"In fact, many athletes from different parts of China have enrolled in the national team. It now has cross-country skiing athletes from 10 ethnic groups from 14 provinces and regions," Zhang said.

Of the 176 athletes in the Chinese delegation at the Beijing Winter Games, there are 20 from nine ethnic minorities, including Tibetan, Uygur, Manchu, Hui, Kazak and Hani.