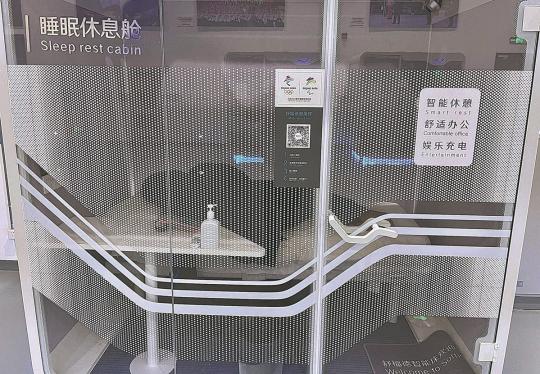 High-tech cabins at the Beijing media center give journalists the chance to catch up on some sleep. (ZHANG WEI/CHINA DAILY)

Earlier this month, a self-driving car carried the Olympic torch for the first time in the Games' history, showcasing China's ambitions and ability to produce such vehicles.

Developed by information technology giant Baidu, the car carried the torch for about 800 meters on Feb 2 at Shougang Industrial Park in Beijing, which is hosting several Games events.

Wei Dong, vice-president of Baidu's intelligent driving business group, said, "We prefer to call it a robot because we will increasingly engage with more moving robots in our daily lives."

Liu Qi, a senior technical expert at China Unicom's Smart City Research Institute, said this system supports four types of unmanned vehicles. For example, it can guide an unmanned ferry or delivery vehicle in complex environments where there is a mix of people and vehicles.

Thanks to the integration of 5G technologies and the Beidou Satellite Navigation System, the unmanned vehicles can achieve continuous, high-precision positioning to within 10 centimeters, Liu added.

This is the first systematic use of Level 4 intelligent vehicle networking in an Olympic setting, according to China Unicom. Level 4 autonomy means that a vehicle can operate in most conditions without a human driver.

China Unicom has also equipped all competition venues and stadiums with the 5G network, which enables ultrahigh-definition video transmission, along with virtual reality and augmented reality live broadcasts. The company said it will fully use the opportunity of the Games to increase its international influence.

At the opening ceremony on Feb 4, the potential of many technologies, including 5G, AI and the internet of things, won many admirers by blending perfectly with art to deliver a realistic, dynamic and immersive experience for Chinese and overseas visitors.

Chang Yu, director of the opening and closing ceremonies department for the Beijing 2022 organizing committee, said, "We decided about two years ago that instead of huge crowds, we were going to rely more on modern digital technologies and their 'chemistry' with performers."

The National Stadium, also known as the Bird's Nest, has undergone an intelligent transformation to host the opening and closing ceremonies. Digital technology is used to operate equipment and for energy management and environmental quality control, providing favorable conditions for the ceremonies.

Chang said, "Inside the Bird's Nest, we've set up digital workstations and rendering workshops for instant visual effect generation, completely upgrading the venue from a traditional structure to a smart stadium."

Instead of using traditional projection, the entire floor of the stadium is fully equipped with high-definition light-emitting diode, or LED, technology.

The huge LED screen boasts more than 10,000 sq m of display panels, each equipped to make the ceremonies as clear and detailed as possible, according to Chinese display manufacturer BOE, whose technologies are used in the panels.

The company also made the giant LED snowflake in the center of the stadium, which comprises 96 smaller counterparts. The snowflake houses more than 550,000 small LED light bulbs, as the designer wanted it to be a symbol to unite athletes, BOE added.