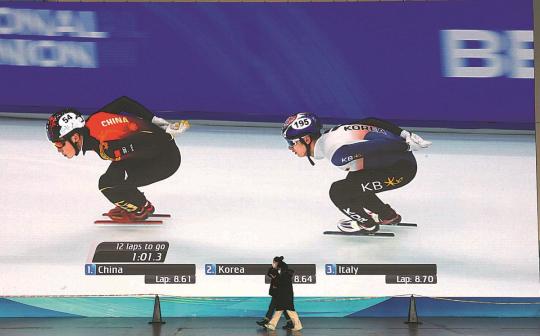 At the opening ceremony, performers' movements were captured in real time by the screens on the stadium floor.

During the "peace dove" part of the ceremony, no matter where the child performers ran, the snow at their feet followed, creating a strong visual appeal. Chang said this was not a pre-designed effect, but the use of "real-time capture, rendering and playback" technology.

Technologies such as AI and 5G have also been widely employed to construct venues. AI giant Megvii used GPS and vision fusion technologies to build a detailed high-precision 3D map of the Bird's Nest and several other Olympic venues.

Such smart augmented reality navigation can provide an immersive virtual-real fusion effect with accurate positioning and no delays, Megvii said, adding that the technology is not affected by buildings, ice and snow, for example.

Some athletes have been surprised to find food delivered to their rooms by robots developed by Chinese tech company Segway-Ninebot. After orders are placed, these devices take elevators and navigate their way from restaurants to competitors' rooms. They also patrol competition venues as security guards.

Segway-Ninebot said the robots use technology that allows them to operate in precise locations in different environments, as well as algorithms to achieve smooth movement.

High-tech cabins at the Beijing media center also give journalists the chance to catch up on some sleep. The 20 cabins were developed by China's Keeson Technology Corp, and with a simple scan of their phone media representatives can use them for power naps for up to an hour.

The spacious cabins are equipped with the same type of beds provided for the athletes. Users adjust the position of the beds, which have a massage setting, by using a remote control or their phone.

This month, United States luge athlete Summer Britcher said on a social media platform that the beds' "zero gravity" mode can produce the "phenomenal" feeling of being in outer space.

A reliable system for broadcasting Olympic events is also key to ensuring that more people enjoy the top-level competition, given that many spectators, especially foreigners, have been unable to attend the Games due to the COVID-19 pandemic.

Many tasks can be accomplished much more easily by using 5G and cloud technologies. A powerful, cloud-based rebroadcasting system means much of the editing work can be done remotely by people in other locations－for example, without the need for a broadcasting vehicle or numerous workers at the scene, Dong said.

On-site reporters now use a small camera or smartphone equipped with a stabilizer to livestream a sports event, thanks to 5G and cloud technologies, Dong added.

Zhang Xiaoyang, a technical manager for the Beijing 2022 organizing committee, said the pandemic has posed many challenges for the Games, but has also produced new opportunities to develop technologies.