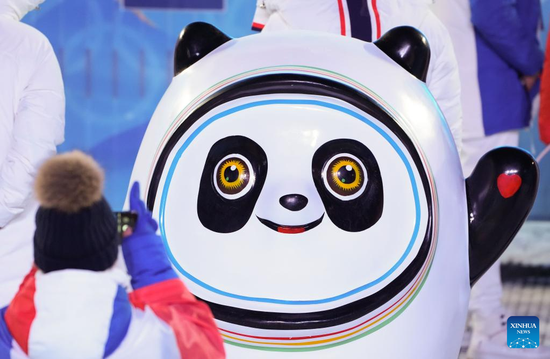 Besides a focus on the superb performance of the Olympians competing in Beijing, such features as greenness and cutting-edge technology and unique Chinese cultural elements shown in the Winter Olympics have also been highlighted in media reports.

Focusing on the transformation and reuse of some contesting venues, Australian Broadcasting Corporation (ABC) said that a key selling point at the Beijing Winter Olympics is "green."

"The sustainability aspect comes from the organiser's commendable aim to be 100 percent carbon-neutral, using carbon dioxide refrigeration techniques, low-carbon transport options and the use of existing venues from the last Games," the ABC report said, citing examples of the big-air competition slope in Shougang, the Bird Nest and the Ice Cube.

Japan's Asahi Shimbun expounded on various environmental protection measures of the Beijing Winter Olympics, including using natural carbon dioxide refrigeration systems for the first time in the Olympics, which helps reduce carbon emissions. In addition, all venues of this Olympics were powered with renewable energy, reflecting the green concept.

Spanish paper Diario AS reported that as Beijing is holding its second Olympics, China has renovated several venues of the 2008 Olympics to reduce costs, citing the example of the National Speed Skating Oval, known as the Ice Ribbon, which was built on a temporary site for Hockey and Archery during the 2008 Olympics.

Italian national public broadcasting company RAI highlighted the high-speed rail linking Beijing and Zhangjiakou with a 5G live broadcast studio on board while traveling at a top speed of 350 km per hour.

The tailor-made bullet train features a media workspace that can transmit ultra-high-definition content via 5G, and takes only 50 minutes for athletes, journalists and other passengers to shuttle between the two cities, it reported, hailing the technology as unprecedented.

The smart restaurant at the main media center of the Winter Olympics is "unique from other Olympics however because it uses robots to make and deliver the food," said Steven Luke, correspondent of U.S. National Broadcasting Company, describing it as "a wild scene straight out of the future."

Brazilian weekly magazine Epoca also elaborate on some revolutionary innovations applied in the Beijing Winter Olympics, including robots, 5G coverage, as well as smart beds and the use of digital currency at the Olympic Village.

Noting the successful application of artificial intelligence, visual technology, 5G and big data in the opening ceremony of the Games, she said technology would play a more important role in sports games.

The website of Brazilian channel SporTV posted a report focusing on the popularity of the Beijing Winter Olympics' mascot Bing Dwen Dwen. Posting photos of the giant panda-shaped mascot, the report said it means "vitality and purity."

French newspaper Liberation also reported the commercial success of Bing Dwen Dwen. The report, citing the organizing committee, said the mascot has reflected the new passion of the Chinese people for winter sports.