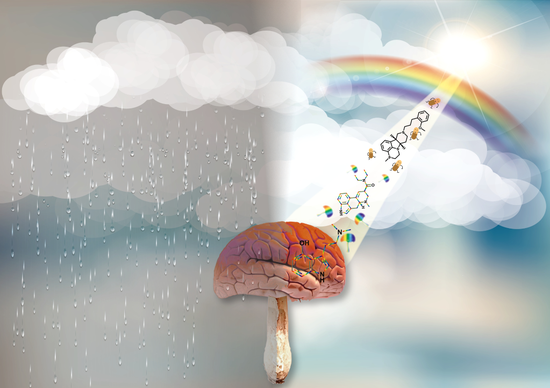 An illustration shows how antidepressant compounds improve one's gloomy mood. (Provided by Center for Excellence in Molecular Cell Science under the Chinese Academy of Sciences)

Chinese scientists designed two new compounds that can relieve depression but do not cause the unwanted effect of hallucination.

Scientists from the Center for Excellence in Molecular Cell Science under the Chinese Academy of Sciences (CAS) and ShanghaiTech University mapped out the crystal structure of psilocybin, an FDA-approved breakthrough antidepressant medicine, when it is bonded with its receptors in the brain called serotonin 2A.

Then, they found a previously unknown binding place of psilocybin and its receptors. A further study showed that the new binding, regulated by lipids and serotonin, is linked with an antidepressant pathway that does not cause hallucinations, according to the study published Friday in the journal Science.

Based on the molecular pathway, the researchers devised two new compounds acting mainly on the newly-found binding place.

In mouse model tests, high doses of the compounds do not trigger head twitch behavior, which has long been seen as indicative of hallucinations, and have maintained similar antidepressant effects with psychedelics, according to the study.

Wang Sheng with CAS who led the study said the findings provide a solid foundation for the structure-based design of safe and effective non-hallucinogenic, rapid-acting antidepressants.

"The compounds reported in this work are not approved drugs, and further preclinical and clinical studies are needed to verify their safety and antidepressant effects in humans," Wang added.