Measures urged to shore up expansion of foreign trade 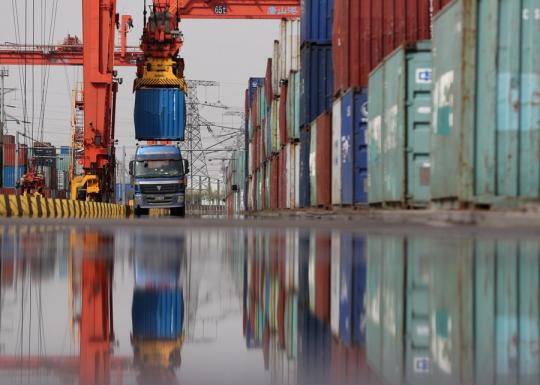 China's foreign trade is estimated to have grown in 2021 at an annual pace unseen for nearly a decade, but growing uncertainties are likely to add pressure to both demand and supply next year, officials and experts said, as they urged the authorities to beef up efforts to support the upbeat momentum.

Ren Hongbin, vice-minister of commerce, said at a news briefing on Thursday in Beijing that China's imports and exports of goods are forecast to reach $6 trillion this year, surging more than 20 percent year-on-year, with the yearly added trade value of $1.3 trillion equivalent to the combined growth in the past decade.

The nation's contribution to global exports and imports in the first three quarters reached record highs of 15 percent and 12.1 percent, respectively.

Analysts have expressed concerns that the Omicron variant is likely to dent global economic recovery, and the pandemic's impact on global industrial and supply chains is set to continue. That will mean more uncertainties in overseas demand and higher trade costs, they said.

Zhou Xuezhi, a researcher with the Institute of World Economics and Politics at the Chinese Academy of Social Sciences, said weaker demand in developed economies due to the expected pullback of fiscal and monetary stimulus, will also likely have an impact on China's exports.

The authorities will reinforce the implementation of a number of recently announced policy measures to benefit enterprises as soon as possible, he said, adding that more new policies are under review and will be introduced as the situation evolves.

He added that the nation will strive to safeguard industrial and supply chain operations and improve their resilience, while helping enterprises reinforce their strengths in developed economies and increase their presence in emerging markets.

The high-quality development of foreign trade transformation demonstration bases will be supported, the innovative development of processing trade will be promoted, and trade facilitation will be improved, he added.

Li Xingqian, director-general of the Department of Foreign Trade at the Ministry of Commerce, said the entry into force of the Regional Economic Comprehensive Partnership on Saturday, a free trade agreement among 15 Asia-Pacific economies, will unleash huge market potential and help China's foreign trade to grow.

Mai Zhiming, the founder and general manager of Goldenrice Food and Trade, a trade company based in Guangzhou, Guangdong province, said he is bullish about the trade prospects as China strengthens its economic ties with other nations.