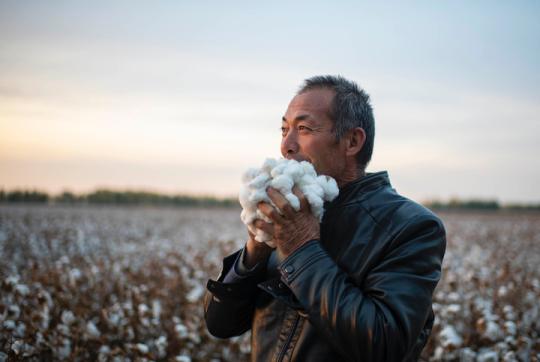 Chinese scholars have debunked the United States' claims of "forced labor" in the Xinjiang Uygur autonomous region's cotton industry, saying the industry is stable and most of the production mechanized.

The groundless allegations and sanctions, which have an ulterior motive, have severely damaged the global cotton production chain, according to a report.

The research is based on a three-month survey in Guangdong province and Xinjiang－two major cotton planting, processing and sales regions. The report, "Hindering Trade, Increasing Costs and Disrupting the Industrial Chain: Impacts of U.S.' Xinjiang-Related Sanctions on Global Cotton Industrial Chain", was released on Sunday by scholars at Jinan University in Guangdong.

"After interviewing over 70 people involved in the cotton industry, we found that the so-called 'forced cotton-picking by ethnic minorities' is ridiculous and the U.S. has falsely accused China of 'genocide' in Xinjiang without any evidence," said Li Hua, a researcher at the university's Institute for Communication and Borderland Governance.

The cotton industry in Xinjiang has developed rapidly, the report said. Manual labor has been replaced in most production procedures and there is widespread use of agricultural machinery.

Cotton planting in Xinjiang is almost 100 percent mechanized thanks to the introduction of modern technology, such as drones, according to the research. The use of machines in cotton collection is more than 85 percent, it said.

The figures support a statement by the China Cotton Association on Saturday, which said that mechanization rate of cotton collection in Xinjiang is 87.9 percent this year.

The cotton industry is a major income source for many farmers in Xinjiang and it is estimated to have brought them income of 1,500 yuan ($236) per mu (0.06 hectares) this year, according to the statement. The industry has helped provide 600,000 jobs for local people.

The U.S. has violated fair and reasonable market economy practices, the association said. It called for the fair and respectful treatment of China's cotton farmers and workers who are making efforts to produce high-quality cotton products to meet the needs of consumers in China and abroad.

"Workers in Xinjiang choose a profession of their own free will, sign labor contracts with employers voluntarily following the principle of equality, and receive payment for their work. We checked those contracts, which are all very standard," Li said.

The cotton industry in China has been stable due to the joint efforts of local government and enterprises, but the U.S. measures to ban imports from Xinjiang have forced many foreign companies to end cooperation with China, the report said. "Changes of the material supplier boosted production costs and damaged the upgrading of the cotton industrial chain. And the consumers in the U.S. are the ones who are paying for this game," Li said.

Xu Jianying, a researcher at the Chinese Academy of Social Sciences' Institute of Chinese Borderland Studies, said the report is a truthful account of the cotton industry in Xinjiang, which uses numbers and facts.

"The tricks the U.S. wants to play are aimed at enhancing its own share in the international cotton industry, as we all know that the country's cotton output had seen a drop last year. They spread lies of 'forced labor' out of political bias and want to contain China for their own interests," Xu said.

Wang Zhouhu, a law professor at Northwest University of Political Science and Law, said that the U.S. is breaking market rules and going against the concept of globalization.

"Xinjiang cotton production is spotless. Those in the U.S. and the West who are hyping up the issue have a dark and sinister intention. They are trying to fabricate lies like 'forced labor' to create 'forced industrial decoupling' and 'forced unemployment' in Xinjiang to suppress Chinese companies and industries to serve their malicious agenda," Wang said.

This year, the cotton planting area across Xinjiang was nearly 2.48 million hectares, a decrease of 23,233 hectares from last year. However, the total cotton output in the region is expected to surpass 5.2 million metric tons this year, an increase of 39,600 tons, according to the region's Department of Agriculture and Rural affairs.

The figures, released by the country's fiber quality supervision and testing center, show that the color, length, resistance and other key factors in determining the quality and performance of cotton produced this year have improved markedly.