Nation's antibody therapy could be in use soon 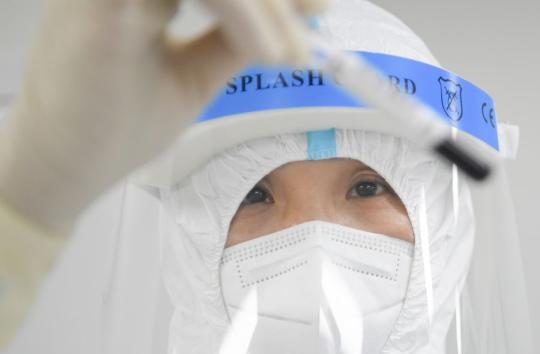 China's domestically developed monoclonal neutralizing antibody therapy for COVID-19 treatment could be used clinically in the country within weeks after it was included in the country's Diagnosis and Treatment Protocol for COVID-19－adding a tool to the global arsenal against the coronavirus.

The global fight could also get a boost when the United States Food and Drug Administration makes a decision in one or two months on the application for emergency use authorization for the dual-antibody therapy, said Zhang Linqi, director of the Global Health and Infectious Diseases Research Center and Comprehensive AIDS Research Center at Tsinghua University's School of Medicine.

"It's a success of the cooperation among Brii Biosciences, Tsinghua University and the Third People's Hospital of Shenzhen, which have jointly developed the antibodies," said Zhang, who led the research team. "The team has accomplished a task within 20 months that usually takes 10 years."

Monoclonal antibodies mimic those generated by the body to fight the virus that causes COVID-19. Antibody therapies can act more rapidly than the body's own process of making antibodies.

China's drug authority granted emergency approval for the antibody cocktail, administered via injections, on Dec 8, based on positive final and interim results from the phase 3 clinical trial with 847 enrolled outpatients around the world. The trial was sponsored by the US National Institutes of Health, according to Brii Biosciences, a multinational biotech company with offices in China and the US.

Trial data found that the therapy could reduce the risk of hospitalization and death in high-risk patients by around 80 percent.

Regarding the emerging Omicron variant of the virus, Zhang said that in vitro pseudovirus testing data suggests that the therapy's combination of monoclonal neutralizing antibodies will work against Omicron and other variants.

Moreover, the therapy can protect people, especially those whose physical condition doesn't allow vaccination, from becoming infected by COVID-19 for around nine to 12 months, he said.

Zhang, a veteran scientist in the fight against HIV/AIDS, said his previous experience helped a lot in the COVID battle.

"The whole development process of the new combination therapy will also contribute to future research and application of the HIV antibodies, which was like a big test for us," he said. "The team will continue to conduct research on better antibodies and strengthen the efficacy of the current therapy and make it more long-lasting."

He also said clinical application of the therapy faces challenges, including that production of monoclonal antibodies takes around two to three months.

"To use the therapy efficiently and scientifically, the authorities need to make a good calculation of the quantity needed, and the company would then produce them based on orders," he said.

Furthermore, monoclonal antibodies are usually expensive. Industry insiders said the Chinese government might include the combination therapy in the public health insurance program, though nothing has been decided.

Zhang, noting that China has used science and technology to fight COVID-19 since the beginning of the outbreak, said: "Science is the core to solving the issue. Science has shown its power in all sectors, from medical treatment, medicine and vaccine development to prevention and control measures."