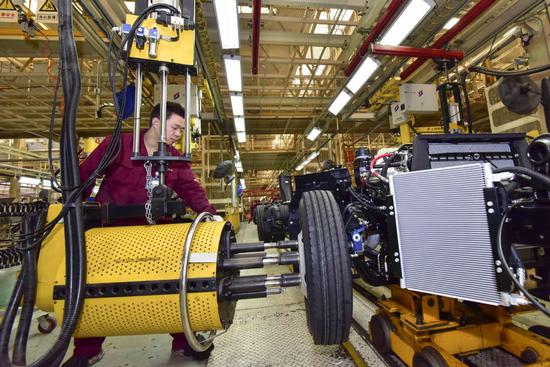 An employee works on the assembly line of a carmaker in Qingzhou, Shandong province. (Photo: China Daily/Wang Jilin)

More policy fine-tuning is likely in the pipeline to consolidate China's economic recovery that stayed steady in October but has come under emerging pressure from fresh COVID-19 cases and a slowing property sector, officials and experts said on Monday.

"Stronger efforts should be made to keep the economy recovering steadily," said Fu Linghui, a spokesman for the National Bureau of Statistics.

Wang Qian, Asia-Pacific chief economist at the US-based Vanguard Investment Strategy Group, said policymakers are expected to strengthen targeted supports for smaller manufacturers and other sectors hit by rising energy prices over the rest of the year and the first quarter of 2022.

"Tax benefits and financial assistance are likely in the pipeline. The possibility of cutting the reserve requirement ratio, either in a targeted or universal manner, cannot be ruled out," Wang said.

Meanwhile, the government may also fine-tune its policy mix for better policy coordination and execution results, and correct any overdone measures such as when it comes to some local government regulations on mortgages and restrictions on coal production, Wang said.

Their remarks came after China reported a mixed picture of better-than-expected data of industrial production and consumption but weakening investment led by the property sector in October.

China's industrial output rose by 3.5 percent year-on-year in October, up from 3.1 percent a month earlier, while retail sales grew by 4.9 percent last month, versus 4.4 percent in September, the NBS said on Monday.

Fu said economic recovery strengthened in October, thanks to the fading of transitory pressure such as the wave of local COVID-19 cases and heavy rainfall in the third quarter, as well as stepped-up efforts to boost the supply of energy and raw materials.

"The Chinese economy is expected to recover steadily with consumer prices increasing at a mild pace," he said.

Yet uncertainties and unstable factors remain in the international environment as well as structural problems in the domestic economy, making more efforts necessary to keep the economy within a reasonable range, Fu said.

"We need more data to confirm the acceleration in production and consumption, especially as domestic COVID-19 cases have surged again in late October and may affect production activities and consumer behavior going forward," Wen said.

Stimuli of a considerable scale, nevertheless, may only be rolled out later upon the easing in supply constraints such as energy use limits and disruptions of COVID-19 resurgences impacting economic activities, said Wang from Vanguard.

The NBS said that China's surveyed urban jobless rate came in at 4.9 percent in October, unchanged from September, while the annual urban new employment target was reached in advance last month.