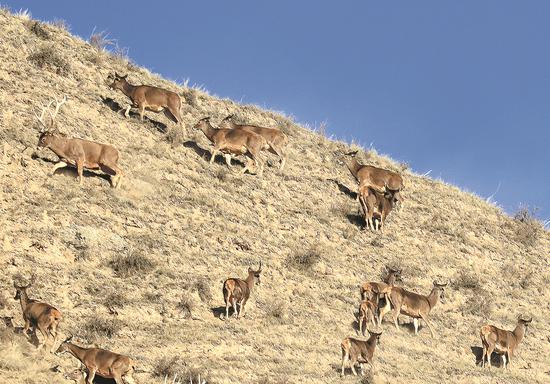 White-lipped deer wander around the Qilian Mountain National Park, Gansu province, on Thursday. The park is one of the 10 pilot national parks established last year. (Photo by Sheng Wenhong/China Daily)

Standards to provide practical solutions for conservation of nature reserves

Five criteria for China's national parks were announced on Monday by the National Forestry and Grassland Administration, aiming to preserve the country's nature reserves more scientifically.

The five criteria are: qualification standards for would-be national parks; technical standards for overall planning; regular monitoring standards; a system to evaluate management of the parks; and boundary standards.

The first draft of the criteria was created on Dec 22 and has been amended over the past 10 months. The criteria were drafted by experts and technicians in various fields, said Hao Yujun, director of the administration's technical department.

"The criteria, learned widely from experiences both home and abroad, were created in a scientific manner. They provide practical solutions for the construction of China's national parks and for the conservation of the country's nature reserves," Hao said at a news conference on Monday.

Of the five criteria, the technical standards for overall planning were established as part of a unified planning system for national territorial space, which is being developed by the Ministry of Natural Resources, according to Tang Xiaoping, director of the administration's National Parks Research Institute.

One of the main reasons for building the system is to protect the country's nature reserves with national parks as a major component. The system will also safeguard the country's environmental security.

"A national park should represent the country's most typical and important biosystems," he said. "In the park, the most vulnerable and endangered wildlife will be protected, and the construction of the park should be guided by the central government."

Tang also noted that a national park should be built under a practical plan that benefits its people and its natural resources.

"A balanced and harmonious relationship between nature and humans will be maintained in the national parks," he said.

During the 15th meeting of the Conference of the Parties to the Convention on Biological Diversity earlier this month, China officially designated its first group of national parks, which cover more than 230,000 square kilometers and conserve nearly 30 percent of the country's key wildlife species.

Since the establishment of China's first nature reserve－Dinghushan nature reserve in Guangdong province in 1956－the country now has more than 10,000 nature reserves, according to Sun Hongyan, an official from the national park's preparation and development team.

Sun said China's national parks have their own characteristics.

"Of all nature reserves, national parks enjoy the highest protection level, and comprehensive protection is emphasized in them," she explained.

In addition, she said the establishment of national parks would not only provide protection over some regions, but also promote the conservation of natural resources.