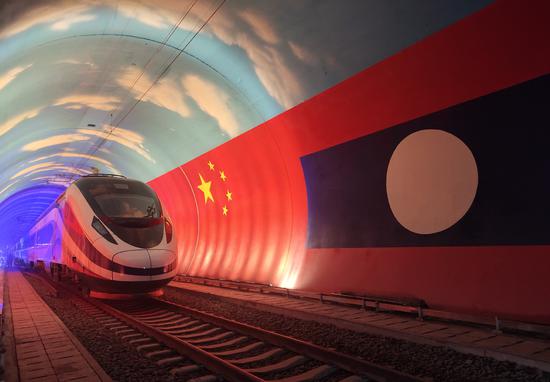 The Lane Xang EMU train passes by the China-Laos borderline inside a tunnel, Oct 15, 2021. (Photo/Xinhua)

A bullet train started its dynamic test run along the China-Laos railway's Lao section on Wednesday, another milestone in the journey to the railway's opening.

The test run is between Vientiane and Boten in Laos, said China Railway International, a subsidiary of China State Railway Group.

Dynamic tests are an important part of vetting before the railway's operation, a comprehensive test of all features of the railway, including electric, communication and noise control systems. The test, carried out by the China Academy of Railway Sciences, will last 18 days.

The China-Laos railway, linking Kunming, capital of southwestern China's Yunnan province, and Vientiane, is expected to open by the end of this year.

Upon completion, the line stretching over 1,000 kilometers will cut travel time between Kunming and Jinghong, a city on the border with Laos, to just over three hours. It is expected to travel from Kunming to Vientiane within a day.