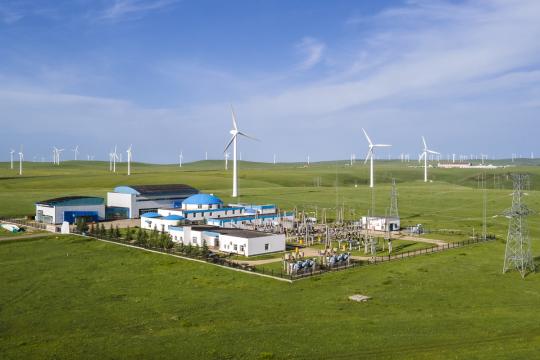 Construction of a photovoltaic project in Qinghai and Henan provinces kicked off on Friday, as part of the government's plan to build massive wind and solar power facilities in the country's Gobi and other desert areas, said its operator State Power Investment Corp.

The project's total installed capacity is almost 1 million kilowatts. It is part of the Qinghai-Henan ultra-high-voltage direct current project, a 1,587 km-long 800kV DC line to transmit renewable energy from the country's western parts to central parts. It is likely to commence operations by the end of the 14th Five-Year Plan period (2021-25), it said.

According to SPIC, the project will take advantage of the massive desert areas and the hydro resources in the upstream of the Yellow River. It will fully tap the potential of the hydro, wind and solar resources in the western parts while rapidly improving the proportion of clean energy in the country's overall energy mix.

Wei Hanyang, a power market analyst at research firm BloombergNEF, said the project will help facilitate China's ambition of reaching more than 1,200 gigawatts of installed solar and wind capacity by 2030.

The northwestern parts of China, which enjoy massive wind and solar resources, will benefit from the policy, Wei said.

The existing power transmission lines, and those under construction or in plans, may also increasingly link green projects with major demand centers in coastal provinces, he said.

China has been working on a massive renewable energy project, with its first phase comprising 100 GW of wind and solar in a desert having recently launched operations.

This is the latest effort by the country to accelerate the planning and construction of large-scale wind and solar projects while simultaneously promoting the adjustment of its industrial structure and energy structure.

With that as the backdrop, many State-owned enterprises, including China National Petroleum Corp and China Petrochemical Corp, China's leading oil refiner, are drawing up plans to develop clean energy projects in the Gobi desert and other desert regions of China.

CNPC said the company has been stepping up utilization of the wind and solar resources in Northwest China's Xinjiang Uygur autonomous region, as well as the experimental project, including the green hydrogen and carbon capture, utilization and storage, or CCUS, technologies.