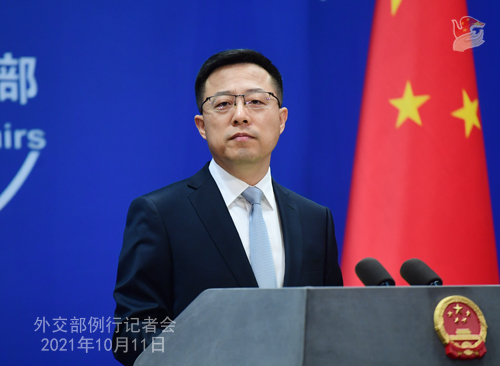 China reiterated on Monday its accusation that the United States delayed the release of information about a nuclear submarine collision, and it urged Washington to clarify the incident, to give a satisfactory answer to regional countries and international community.

The U.S. Navy nuclear-powered submarine USS Connecticut was damaged on Thursday when it struck an unknown object while submerged in the waters of the South China Sea. It has arrived at the port in Guam, the U.S. Navy said last week. However, the Navy gave no details about where the incident took place or the number of people hurt, saying only that the injuries were not "life threatening".

Foreign Ministry spokesman Zhao Lijian said China was gravely concerned about the incident and said that the U.S., as a party involved, bore the responsibility to clearly state what happened in the reported collision.

It took the U.S. five days to issue a vague statement after the collision, and the international community is more suspicious of the U.S.' intentions and details of what actually happened because of its irresponsible attitude and stonewalling cover-up, the spokesman said.

He said he took notice of concerns of a Russian military expert who commented on the collision, saying that U.S. ships and submarines deployed in the Asia-Pacific region often collide with various objects and civil vessels, causing casualties and drawing criticism about their professionalism.

Zhao said last week that the U.S. has long been making trouble in the South China Sea, which poses a grave threat and major risks to regional peace and stability.