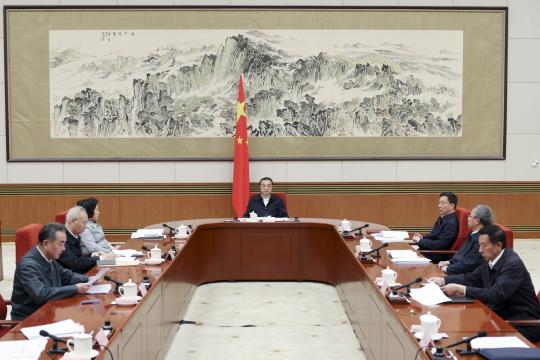 Premier Li Keqiang speaks during a meeting of the National Energy Commission in Beijing on Saturday. (Photo/Xinhua)

He made the remark on Monday while presiding over a meeting of the National Energy Commission in Beijing. Li is the director of the commission, which was established in 2010 for better coordination in formulation of energy strategies and development planning, addressing energy security issues and coordinating major programs relating to domestic energy development and global cooperation.

Participants at the meeting, including Vice-Premier Han Zheng, discussed reform and development in the energy sector. They also reviewed a plan for the country's modern energy system in the 14th Five-Year Plan (2021-25) period and implementation programs to achieve the 2030 carbon peak target.

While underlining the need to take into consideration the national conditions, Li called for efforts to re-adjust the economic structure while stabilizing growth, intensifying market-oriented reforms in the energy sector and promoting transformation of the sector toward green and low-carbon development.

China remains a developing country, and its energy demand will keep rising with the development of industrialization and urbanization, Li said, and it must ensure it has a secure energy supply. Efforts should be made to foster a modern energy system and raise capacity for a self-reliant energy supply, he added.

Li asked for improvements in the efficiency of coal use, additional efforts in gas and oil exploration and strengthening research into energy technologies.

A carbon peak and neutrality is required by the country's economic transformation and upgrading as well as international efforts to deal with climate change, Li said. Realizing the carbon targets calls for long-term and unremitting efforts, he said.

Li said the timeline and road map to achieve the carbon peak target should be undertaken in a scientific way.

A "one-size-fits-all" approach in shutting down energy-intensive projects or "campaign-style" carbon reduction, which has been found in some areas, must be rejected, Li said. Measures should be taken to ensure people in northern parts of China have a secure power supply to ensure they keep warm over winter, he said.