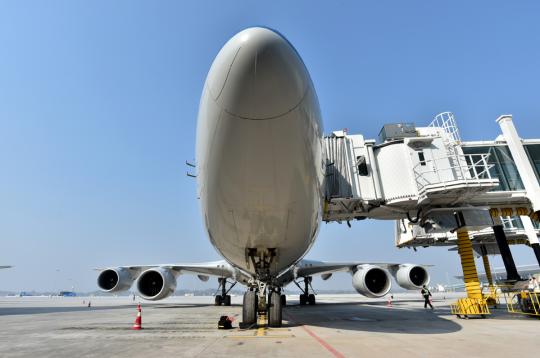 Nation's demand for airplanes to hit 20% of global total in next 20 years, U.S. aircraft maker says

U.S. aircraft manufacturer Boeing Co has again raised its forecast for the demand of aircraft in China, saying that over the next 20 years, Chinese carriers are expected to acquire 8,700 new airplanes valued at $1.47 trillion to meet sharply expanding commercial air travel demand.

In the next 20 years, China's demand will account for 20 percent of the total new airplanes required globally, reflecting China market's rebound and further evolution of its airline business model. China's economic fundamentals laid the foundation for the healthy air traffic increase. By 2040, China's middle-income demographic is expected to double from the current level, Boeing said on Thursday in Beijing.

"In addition, there are promising opportunities to significantly expand international long-haul routes and airfreight capacity. In the longer term, there is potential for low-cost carrier growth to further build on single-aisle demand," he said.

By 2040, China will have continued high demand for single-aisle airplanes and will need nearly 6,500 single-aisle aircraft. The deliveries of wide-body aircraft, including passenger and cargo models, will total 1,850 in the next two decades, accounting for 44 percent of demand by value, Boeing said.

Among the new deliveries, two-thirds of the total aircraft will support China's aviation industry growth and one-third of deliveries are expected for fleet replacement, as more airlines have shown demand for more sustainable and fuel-efficient airplane models.

COVID-19 has had a devastatingly negative impact on the global aviation industry, especially in international long-haul markets, due to travel restrictions imposed by different countries.

Still, Boeing is confident about future market outlook, and it said the domestic market of different countries will recover first, followed by regional and international markets. By 2023-24, the global air travel market is expected to resume at the level seen in 2019, Boeing forecast.

As of July, the volume of passenger traffic in the international market has recovered to 26 percent of the level in 2019 when there was no pandemic, the domestic markets of different countries have seen their passenger traffic resume to 84 percent on average. Among the fleet that has resumed operations, 70 percent of the total are single-aisle aircraft, Boeing said.

China's domestic air travel market is steadily picking up, with the pandemic brought under better control by and large across the country, sporadic outbreaks notwithstanding.

Boeing also forecast that by 2040, China's civil aviation industry will require more than 400,000 new aviation personnel, including pilots, technicians and cabin crew. Besides, China has shown a nearly $1.8 trillion commercial aviation services market opportunity in the next 20 years.

Across its businesses, training, supply chain and other activities, Boeing's presence and partnerships in China contribute more than $1.5 billion annually to the Chinese economy.

In addition, Boeing said China will need a significant number of freighters. Since the pandemic, global freight capacity dropped 11 percent compared to the pre-pandemic period, but total turnover has exceeded the level seen before the pandemic.

Currently, China stands as the largest and an important strategic market for Boeing and its European rival, Airbus.

"The China market has shown a huge demand for new aircraft. For aircraft manufacturers, it is important for them to grab the business growth opportunity in China," said Lin Zhijie, an aviation industry analyst and a columnist at Carnoc, one of the largest civil aviation websites.

The first C919 narrow-body passenger jet, which is set to be delivered to China Eastern Airlines before year-end, will enter the final assembly stage soon, according to its manufacturer Commercial Aircraft Corp of China.

C919 stands as China's first self-developed large passenger jet, and its competitors include aircraft models such as the single-aisle B737 of Boeing and the A320 of Airbus. The upcoming launch of the C919 is expected to provide more choices for global carriers.