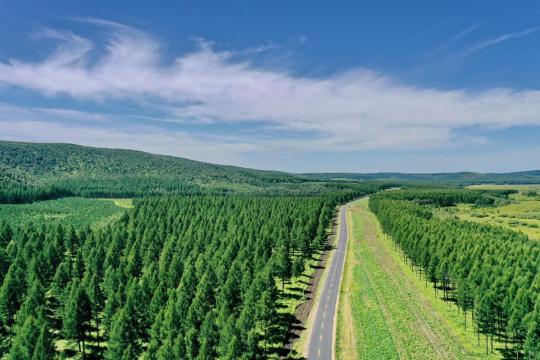 China has seen more financial resources funneled toward green projects as it embarks on the path of carbon neutrality, according to a report published on Wednesday, which coincided with the first anniversary of the announcement of the country's ambitious climate targets.

President Xi Jinping said in an address to the United Nations General Assembly on Sept 22, 2020, that China aims to have carbon dioxide emissions peak before 2030 and achieve carbon neutrality before 2060.

"In the past year, China has demonstrated unprecedented powers to take action," said the report, Carbon Neutrality: China in Action, which was jointly compiled by three institutions, including the Chongyang Institute for Financial Studies at Renmin University of China.

Policies released by the People's Bank of China over the past year, for example, have encouraged financial resources to be tilted to green and low-carbon projects, the report said.

By the end of the second quarter, the balance of loans for green projects, in domestic and foreign currencies, reached 13.92 trillion yuan ($2.16 trillion), up 26.5 percent year-on-year. The growth rate is 14.6 percentage points higher than the average growth in lending, according to the report.

Loans for investment in projects that could result in direct and indirect reductions in carbon emissions stood at 6.79 trillion yuan and 2.58 trillion yuan, respectively.

"These together account for 67.3 percent of green loans, indicating that with the work related to the dual carbon goals officially entering the fast track, green financial support for carbon emission reduction has taken a massive leap forward," it said.

Chinese financial institutions are continuously scaling up their green finance businesses, it said. As of the end of 2020, the green loan balance of the Industrial and Commercial Bank of China, for example, had reached 1.85 trillion yuan, an increase of 220 billion yuan from the start of the year.

The Bank of China has issued climate and green bonds in multiple currencies overseas, it continued.

Former Australian prime minister Kevin Rudd said while addressing the Carbon Neutrality: China in Action Global Live Seminar via video link on Wednesday, at which the report was released, that China has taken greater concrete action as it forges ahead to meet its climate targets.

Chinese central authorities have established a leading group on the two carbon targets. The draft of concrete action plans for different levels of governments, enterprises and other social sectors is being accelerated, Rudd noted. "What is especially encouraging is the development of green financing," he said.

The Green Bond Support Project Catalogue, which was jointly published by the People's Bank of China, the National Development and Reform Commission and China Securities Regulatory Commission, come into force this year, he said. Green loans from some Chinese banks now total almost 2 trillion yuan.

All of these measures illustrate China's responsible approach and action taken to address the climate crisis, Rudd said. "They have also demonstrated China's leadership on climate issues, as these actions have exerted positive influence on global climate action, as well as the actions in other countries," he said.

Gao Anming, vice-president and editor-in-chief of China International Publishing Group, said at the seminar that despite the achievements the country has made in its low-carbon transition, making climate targets a reality is a greater challenge.

As of the end of 2020, clean energy accounted for almost a fourth of the country's energy consumption. In the same year, China led the world in installed capacity of wind and solar energies, while carbon dioxide emissions per unit of GDP almost halved from 2005, he noted.

China's huge population and large economy make it the largest carbon emitter in the world, but United States research shows that China's per capita carbon emissions rank 11th in the world and it is only 45 percent of that in the U.S.

"China is the largest manufacturing power in the world and is still in a phase of rapid growth. It's of great difficulty for China to reduce carbon emissions," he said, adding the impact from the COVID-19 pandemic and the complex international environment both make it more challenging for China to realize carbon neutrality.