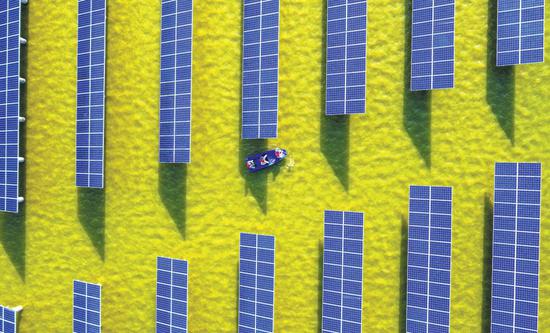 Frans Timmermans was delighted this summer when he learned China had launched its national carbon emissions trading market in an attempt to fight climate change.

The executive vice-president of the European Commission for the European Green Deal is also proud that the European Union's Emissions Trading System, or ETS, is inspiring other countries and regions to develop similar systems to make their economies less dependent on carbon. The ETS was set up in 2005 as the world's first such system.

Timmermans said the ETS, which operates in all EU member states plus Iceland, Liechtenstein and Norway, and covers about 40 percent of the EU's greenhouse gas emissions, has been extremely successful.

"I saw this summer China had also introduced an emissions trading system, and I want to really salute that step," he said.

Timmermans believes that bilateral exchanges and cooperation on climate might have helped China introduce its system.

The EU shared its technical expertise in recent years when China piloted emissions trading plans in several cities to pave the way for its national system.

China's national carbon market, launched on July 16, includes more than 2,000 companies in the power generation sector and covers over 4.5 billion metric tons of carbon dioxide annually. It replaced the EU's ETS as the world's largest such mechanism.

"This is a way to continue our cooperation on concrete measures and concrete steps forward," said Timmermans, who was named one of Time magazine's 100 Most Influential People of 2021 on Sept 15.

Timmermans, the Dutch foreign minister from 2012 to 2014, has been the No 2 person in the European Commission since 2014, when he served as first vice-president to Jean-Claude Juncker.

Timmermans said China has historically played a crucial role in getting the world to commit to keeping the rise of global temperatures below 2 C.

"We would not have a Paris Agreement without China playing a very, very active role in coming to a conclusion," said Timmermans, who is also European Commissioner for Climate Action.

The Paris Agreement reached in 2015 aims to limit the global temperature rise this century to 2 C from pre-industrial levels while pursuing efforts to further curb it to 1.5 C.

Timmermans is convinced there is a deep understanding in China that the country needs to continue to play a historic role in getting the world to come to terms with the climate challenge.

On Friday, a United Nations report said the global average temperature will rise by 2.7 C by the end of the century even if all countries meet their promised emission cuts. UN Secretary-General Antonio Guterres warned, "The world is on a catastrophic pathway".

Timmermans emphasized the need for a strong commitment from all major emitters to make the 26th UN Climate Change Conference, or COP26, in Glasgow, Scotland, a success. The conference is scheduled for Nov 1 to Nov 12.

He said speeches by President Xi Jinping and Xi's recent phone call with United States President Joe Biden gave him hope that China would make a major contribution to success in Glasgow.

Xi pledged at the 75th session of the UN General Assembly in September last year that China would aim to peak its carbon emissions before 2030 and achieve carbon neutrality before 2060.

In a phone call with Biden on Sept 10, Xi said China and the US should advance cooperation on climate change and other issues on the basis of respecting each other's core concerns and properly managing differences.

While China is the world's largest emitter of greenhouse gases, with about 27 percent of the global total, its per capita emission figure is slightly higher than the average for the EU's 27 member states and only half that the US, which is by far the largest historical carbon emitter.

Timmermans said nations, especially major powers, will act if they consider it in their interest, adding that they will not act just to please others, and this is also the case for China.

He said the EU has set a good example to show countries that came late to the industrialized world that there is a way to grow economically and still reduce emissions, adding that the EU cut its emissions by 24 percent while growing its economy by more than 60 percent in the past 20 years.

Timmermans said the EU and China can work together, especially in energy transition, an area which China has been advancing rapidly.

He described China's plan to achieve carbon neutrality from its emissions peak in just 30 years as the shortest in the world, compared with 70 years for the EU and 45 years for the US.

Timmermans said the EU and China can work together in many fields, from renewable energy to electric cars－not just for themselves, but to also help the developing world leapfrog and bring noncarbon-based energy to its people.

"I see very many areas where the European Union and China can develop their relationship to make this transition go smoothly, and to do it in the interests of our people and also to leave no one behind," he said.

"We need to share them as soon as possible," he said, adding that this must be done on a level playing field where investments are protected.

Timmermans feels that the use of coal should stop as soon as possible. Instead, the future of the steel industry lies in green steel, where the heat needed to make the alloy comes not from coal, but green hydrogen produced from solar and wind power.