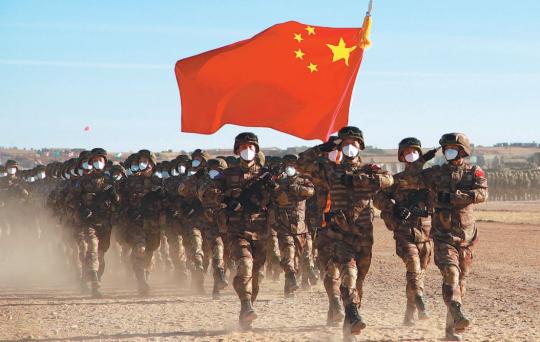 About 4,000 officers and soldiers from eight SCO members, including China, Russia, Kazakhstan, Pakistan and India, are taking part in the exercise at the Donguz firing range.

China's People's Liberation Army sent 558 troops and 130 vehicles to the event, the 14th joint exercise organized by the SCO.

Colonel General Aleksandr Lapin, commander of the Russian Armed Forces' Central Military District, announced the opening of Peace Mission 2021 at a ceremony on Monday. The exercise is taking place as the SCO marks its 20th anniversary, he said, noting it is a strong, significant measure against terrorism.

The exercise will demonstrate and test new tactics for joint combat operations to counter new weapons acquired by terrorists. "We believe that through the joint efforts of participating soldiers, we will definitely accomplish the predetermined tasks and make the exercise a full success," the Russian general said.

Major General Zhao Kangping, deputy chief of staff of the PLA Northern Theater Command and commander of the Chinese troops participating in the drill, said that the exercise is intended to broaden and deepen political trust, military exchanges and defense and security cooperation among SCO members. It is expected to improve their capabilities to cope with new challenges and threats and will also help to safeguard regional peace and security, he added.

Three groups of Chinese soldiers marched in a parade after the ceremony.

The exercise is divided into two sections. From Monday to Wednesday, commanders will meet to plan for tactics and maneuvers while the troops undergo training. From Thursday to Friday, troops will engage in live-fire anti-terrorist drills.

He Lei, a retired PLA lieutenant general and now a senior researcher at the PLA Academy of Military Science, said it is meaningful for the SCO to hold a joint counterterrorism exercise to mark its 20th anniversary as the organization has become an important, constructive force in international and regional affairs and played active roles in safeguarding world peace and regional stability.