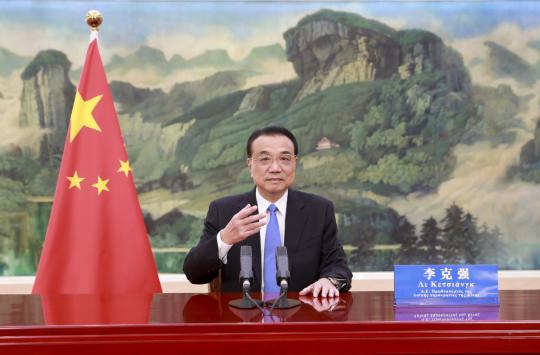 Premier Li Keqiang delivers a speech via video at the opening of China-Greece Year of Culture and Tourism 2021 in Beijing, on Sept 17, 2021. （Photo/Xinhua）

Premier: Long histories of two nations have endowed both with heritage

Premier Li Keqiang underscored on Thursday the joint responsibility of China and Greece to usher in the progress of human history and civilizations, saying that both sides should enable the blossoming of their ancient wisdom, amity among the peoples and exchanges between the two civilizations.

In a speech delivered via video link at the opening of China-Greece Year of Culture and Tourism 2021, Li said exchanges and mutual learning between civilizations is the fundamental way to obtain wisdom and strength, especially as the international landscape undergoes profound changes and various challenges and difficult issues arise.

He said the long histories of China and Greece have endowed both nations with a splendid cultural heritage, which has provided a fertile ground for both sides to step up people-to-people exchanges and enhance bilateral friendship.

The affinity and amity between the two peoples have served as an inexhaustible impetus for friendship and win-win cooperation for the two nations, he added.

The rich outcomes of bilateral cooperation have benefited people from both sides, and both nations wrote a new chapter of bilateral friendship as they stood in solidarity and helped each other in the face of the COVID-19 pandemic, the premier said.

Li underlined the special significance of hosting the cultural and tourism event as next year marks the 50th anniversary of the establishment of Sino-Greek diplomatic ties, adding that he believes the event will become a new highlight for the two sides to bolster mutual understanding, deepen traditional friendship and promote pragmatic cooperation.

Greek Prime Minister Kyriakos Mitsotakis also spoke via video link at the event, which opened at the Ancient Agora of Athens on Thursday evening.

China and Greece signed a Memorandum of Understanding on the organization of the year of culture and tourism in November last year, and the two sides will host a series of events, including digital exhibitions, in a bid to strengthen bilateral ties and expand collaboration in culture and tourism.