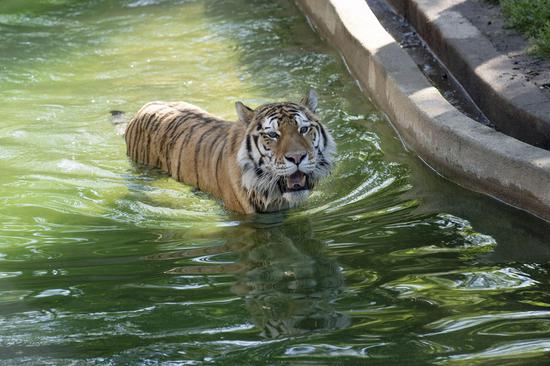 Photo taken on May 21, 2021 shows a tiger at Smithsonian's National Zoo in Washington, D.C., the United States. (Xinhua/Liu Jie)

All of the lions and tigers living in the Smithsonian's National Zoo in U.S. capital Washington, D.C. have tested presumptive positive for coronavirus, the zoo said in a press release on Friday.

Fecal samples for all great cats, including six African lions, a Sumatran tiger and two Amur tigers, were collected and tested presumptive positive, said the zoo. Final results are expected in the next few days.

No other animals at the zoo are showing any signs of infection, said the zoo, which just celebrated panda cub Xiao Qi Ji's first birthday late last month.

All lions and tigers are being treated with anti-inflammatories and anti-nausea medication to address discomfort and decreased appetite, as well as antibiotics for presumptive secondary bacterial pneumonia, according to the zoo.

They remain under close observation, the zoo added.

Zoo staff still managed the cats' access to their outdoor habitats since their condition does not require they remain inside. However, given the substantial distance between the animals and visitors, the public is not at risk, the zoo said.

So far there is no evidence to pinpoint the source of the infection, the zoo said, adding it has conducted a thorough investigation of all staff that were in close proximity to the lions and tigers.

The U.S. Department of Agriculture has authorized the use of a SARS-COV-2 vaccine made specifically for zoo animals by Zoetis. The first round of vaccine disbursement will be administered to select animals identified as a susceptible species at both the zoo and Conservation Biology Institute in Virginia when it becomes available in the coming months, said the zoo.

It has been standard practice for all animal care staff and essential staff working in the zoo to mask indoors in all public and non-public areas.