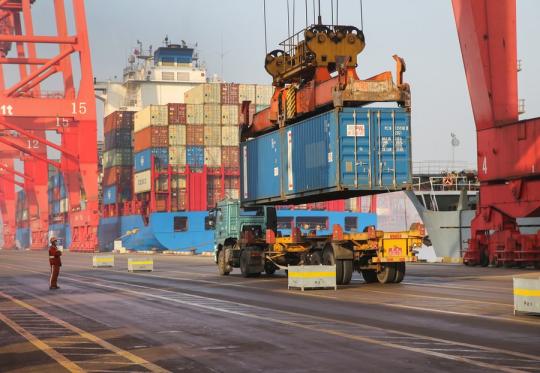 Cargos are unloaded from a container ship at the container terminal of the Lianyungang Port in East China's Jiangsu province, on Jan 14, 2021. (Photo/Xinhua)

China's formal application on Thursday to join the Comprehensive and Progressive Agreement for Trans-Pacific Partnership, or the CPTPP, is the latest proof of the country's higher-level opening-up and shows its resolve to make greater contributions to the world economy, experts and government officials said on Friday.

On Thursday, China's Commerce Minister Wang Wentao submitted the application via a letter to Damien O'Connor, minister for trade and export growth of New Zealand, which is the depositary for the CPTPP.

The two ministers also held a teleconference and communicated on the relevant follow-up work.

Zhao said: "China will conduct necessary talks with the CPTPP members in accordance with the relevant CPTPP procedures.

"China is a faithful advocate of trade liberalization and facilitation, and also an important participant of regional cooperation and economic integration of the Asia-Pacific."

China signed the Regional Comprehensive Economic Partnership agreement with 14 other countries in November. Now, if it also joins the CPTPP, it would help accelerate the economic integration of the Asia-Pacific region, as well as benefit the global economic recovery, trade development and investment growth, Zhao said.

Huo Jianguo, vice-chairman of the Beijing-based China Society for World Trade Organization Studies, said:"The application showed China is ready for next-step moves to join the CPTPP, including follow-up negotiations and adjustment of domestic regulations and laws to align with higher-level economic and trade liberalization and facilitation rules."

It also showed China, the world's second-largest economy, is willing to further engage in multilateral economic activities. This is not only good for China but world trade and the global economy, Huo said.

Their aggregate GDP accounts for 13 percent of the global economy, covering a combined population of about 498 million.