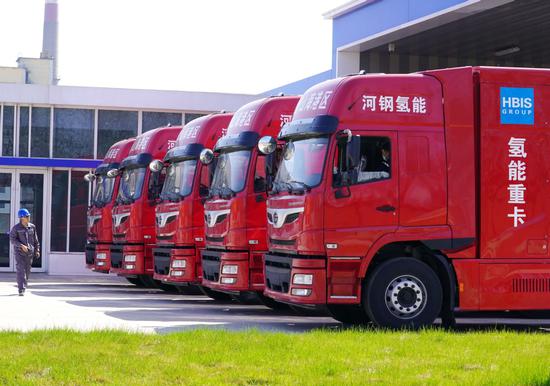 While more than one-third of centrally administered State-owned enterprises are gearing up to tap China's hydrogen power development, at least 23 provinces nationwide have also announced hydrogen plans by August, according to figures released by BloombergNEF.

Many of them have set transport as their main downstream focus, with companies such as China Petroleum and Chemical Corp, or Sinopec, China National Petroleum Corp and State Power Investment Corp Ltd all coming up with detailed plans for developing hydrogen refueling stations and hydrogen-powered transportation, it said.

As the first national oil and gas company to look at green hydrogen for industrial use, Sinopec－banking on Beijing's environmental policies to boost demand for zero-carbon fuels and the equipment and facilities needed to produce them－has been paving the way for China's hydrogen strategy.

It has invested in two of the world's largest green hydrogen projects in Ordos, the Inner Mongolia autonomous region and the Xinjiang Uygur autonomous region, each with an annual output capacity of 10,000 metric tons.

The plant in Ordos is expected to be completed by next year, and will supply hydrogen to a coal-to-chemicals plant there run by Zhongtian Hechuang Energy. The one in Xinjiang will supply Sinopec's local oil refinery.

"China's national oil and gas companies have all announced their own net-zero targets following the nation's pledge, pursuing hydrogen use in transport as a hedge against future drops in petrol-based fuel sales," said Cao Lujia, an analyst with BloombergNEF.

"While China National Petroleum Corp is eyeing the development of a low-cost hydrogen value chain and to build hydrogen refueling stations in anticipation of a drop in petrol demand from road transport, Sinopec－with the largest downstream market presence in the country－has the most ambitious hydrogen plans in place, and hydrogen for the transport sector will likely be its top priority," Cao said.

Sinopec, China's largest oil refiner and petrochemical producer, also aims to become the country's top hydrogen company by 2025 and achieve net-zero carbon emissions by 2050, 10 years ahead of the national target.