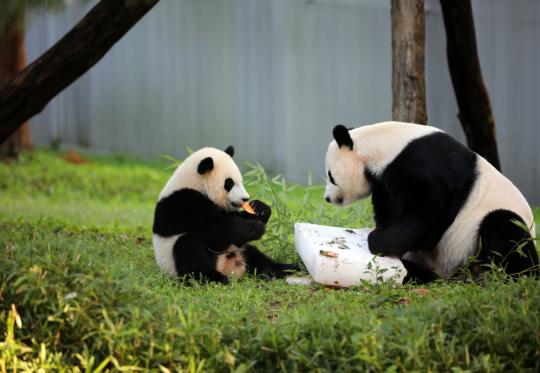 Among the visitors was Karen Wille, who works for Pandas International, a US nonprofit organization, who said she has visited pandas in China eight times.

"They're just amazing, magical animals that have captured the hearts of so many," she said. "It inspires people to learn about conservation, and also to help protect other animals as well."

The National Zoo has cooperated with China to study, care for and save the giant panda for nearly half a century.

Over the next 20 years, that pair produced five cubs, but none survived more than a few days.

The arrival of Mei Xiang and Tian Tian in 2000 changed the situation. Since 2005, Mei Xiang, age 23 now, has given birth to four surviving cubs.

In China, the number of giant pandas has increased from 1,100 in the wild 40 years ago to more than 1,800 now. The species is no longer listed as "endangered".