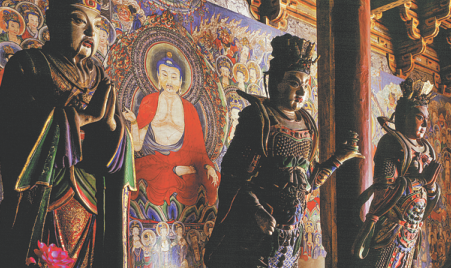 When listing the top attractions in the renowned Chinese historic city of Datong in the north of Shanxi province, tourists immediately think of Yungang Grottoes.

Yungang Grottoes in the western suburbs of Datong is a treasure trove of Buddhist art created during the Northern Wei Dynasty (386-534) when Datong served as a national capital.

At the center of Datong, there is another historic site with similar significance. This is Huayan Temple, a Buddhist temple built during the Liao Dynasty (916-1125).

The temple got its name from Huayanjing, or Avatamsaka Sutra, one of the most important sutras in Buddhism, particularly the Mahayana Buddhism that is still popular in China.

Huayan is currently one of China's largest Buddhist temples built during the Liao and Jin (1115-1234) dynasties.

There are still a number of well-preserved remains of the Liao and Jin dynasties, including buildings, statues and decorated ceilings, showing Buddhist art of that period.

Reputed as an "art museum of Liao and Jin dynasties", the temple holds an important position in the history of Chinese culture and architecture. It is made of upper and lower temples.

The Grand Hall of Sakyamuni in the upper temple is the remains of both Liao and Jin dynasties, with a preserved foundation built in Liao and the main structure built in Jin. Researchers said it is the largest preserved singular Buddhist temple hall of the Jin Dynasty in China.

Inside the hall, a golden statue of the Buddha of Five Directions, which was erected in the Ming Dynasty (1368-1644), and the huge mural showing the life stories of Sakyamuni, which was created during the Qing Dynasty (1644-1911), are also representatives of Buddhist artistic achievements of their corresponding periods.

The Grand Hall of Sakyamuni of the lower temple, built in the Liao Dynasty, is the oldest preserved structure in Huayan.

The statues, including three Buddhas of the Past, Present and Future, and 28 renowned followers of the Buddha, represent the high level of statue art of that period.

Among the 28 followers, a Bodhisattva with an appearance of a young woman, was called by Chinese historian Zheng Zhenduo as the "Oriental Venus".

The highest structure in Huayan Temple is the 43-meter Huayan Pagoda, which is a contemporary structure in ancient style.

The pagoda can give visitors a panoramic view of Datong; its ancient streets and old buildings inside the old urban area are surrounded by a city wall, moat and a modern Datong outside the wall with skyscrapers and booming commerce.

That's why many tourists say the temple takes them on a time warp to the ancient and modern city of Datong.