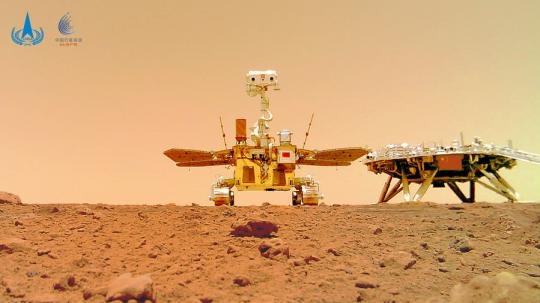 China is working on several mega space programs that aim at pushing forward the frontiers of its science, technology, engineering and exploration.

Once these programs are completed, the nation will have a massive space station, an unmanned outpost and more robots on the moon, and will bring the first Martian samples back to Earth.

In a speech addressing China's top scientists and engineers in late May, President Xi Jinping said Chinese researchers have managed to "seize the commanding heights" in major strategic spheres of science and technology such as deep space, deep sea and cyberspace.

He noted that space exploration is now a symbol of superiority in science and technology, listing a host of achievements made by China including its Beidou navigation network and the return of lunar samples.

Pang Zhihao, a space industry observer and a retired researcher at the China Academy of Space Technology, said: "The exploration and peaceful use of outer space are among top priorities on China's agenda for its science and technology. Space is one of mankind's final frontiers and will likely provide solutions to many outstanding problems in today's world.

"Space programs help China advance its science and technology, enable the country to demonstrate and bolster its engineering capabilities, create a great deal of socioeconomic benefits, offer opportunities to a wide variety of businesses, and inspire and motivate students and other young people. I can name many reasons for the nation to support space endeavors."

In the coming days, Chinese astronauts on board the core module of the Tiangong space station will conduct their second extravehicular activity, or spacewalk, which is expected to take several hours at an altitude of about 400 kilometers. They will install and fine-tune equipment outside the core module during the spacewalk.

As of Friday morning, the Shenzhou XII crew had flown with Tianhe, or Harmony of Heavens－the first and central component of the Chinese space station－for nearly 64 days. They are scheduled to remain in space until mid-September, when they will return to Earth.

Now, the country has set an even bigger goal－to land its astronauts on the lunar and Martian surfaces and then bring them back safely.

Pang said all spacefaring nations are giving great importance to space science and technology and are making all-out efforts to develop their space programs, because "no one wants to lag behind in this new space era".

Guo Hongfeng, a researcher at the National Astronomical Observatories of the Chinese Academy of Sciences, said there are many sorts of resources in space that can be utilized for the common good of humanity.

"For instance, the moon has an abundance of mineral resources, including titanium, silicon and aluminum. Among them, the most valuable is helium-3, an ideal fuel for future nuclear fusion power plants. There are presumably 15 to 20 metric tons of helium-3 on Earth that can be exploited by humankind, but the reserve of this substance on the moon is at least 1 million tons," she said.

"Many scientists have mentioned the mining of helium-3, because if such an element can be mined and taken back to Earth, it will revolutionize the energy and power industries."

Ouyang Ziyuan, a senior adviser to China's lunar program and its former chief scientist, said that if mining the moon for helium-3 and obtaining nuclear power from it becomes a reality, this source of energy could be used to generate power on Earth for more than 10,000 years.

Guo also said that research on lunar samples is one of the most important ways for scientists to know about the past, present and future of the moon, and it also helps a lot when they investigate the evolution of other members of our solar system.

Since becoming China's top leader in late 2012, Xi, who is also general secretary of the Communist Party of China Central Committee and chairman of the Central Military Commission, has stressed the significance and value of the space industry on many occasions and has made several specific instructions to space authorities.

Each time Chinese workers make a remarkable achievement, the president sends them a congratulatory letter or personally meets with their representatives.

In February, Xi met officials, scientists and engineers involved in the Chang'e 5 lunar mission, China's most sophisticated and challenging space mission by that time, which brought back the world's first lunar samples in more than 40 years.

He listened to a report about lunar samples, project developments, scientific findings, international cooperation and future plans. He also inspected a sample of lunar soil obtained by the Chang'e 5 mission.

During the meeting, the president urged space industry workers to take advantage of China's unique resource-mobilization system when they plan and carry out future space programs.

He also asked them to foster more innovation and growth in the country's space science, technology and application sectors, and strengthen international cooperation to make bigger contributions to the well-being of mankind.

In May, after the nation's first interplanetary adventure－the Tianwen 1 mission－successfully touched down on Mars, Xi sent a congratulatory letter calling it a new milestone in China's space industry. He said that space workers' achievements had earned the nation a leading place in the global arena of interplanetary expeditions, and their contributions will be remembered forever.

The biggest and most important space project China is carrying out is the in-orbit construction of its permanent space station Tiangong, or Heavenly Palace.

Upon its scheduled completion, before the end of 2022, the station will consist of three main components－a core module attached to two space labs－with a combined weight of nearly 70 tons and it will become one of mankind's largest pieces of infrastructure in space. The entire facility is set to operate for about 15 years, mission planners have said.

The central section of the station-Tianhe－was put into orbit in April. It is now connected with the Tianzhou 2 robotic cargo spaceship, launched in late May, and the Shenzhou XII spacecraft that transported three astronauts to the module in mid-June.

Based on project plans, the Tianzhou 3 cargo ship will be launched in September to dock with Tianhe, and in October, another three-member crew will fly in Shenzhou XIII to the module to stay there for six months.

In 2022, two large space labs will be launched to connect with the core module. In addition, two manned missions and two robotic cargo flights will be made to continue construction of the Tiangong station.

Upon its completion, Tiangong will be manned regularly by groups of three astronauts in periods lasting several months. During hand-overs to new three-member crews, the station will accommodate up to six astronauts.

Hao Chun, director of the China Manned Space Agency, said his agency will strive to make the best use of the station to advance space science, technology and application.

Ji Qiming, the agency's assistant director, said outer space is a shared asset of all people on Earth, and space exploration is a universal cause for humankind. He stressed that China is open to cooperation and exchanges with all nations and regions around the globe that are dedicated to the peaceful use of outer space.

In addition to the Tiangong station, China has announced a series of cutting-edge programs to be carried out in the near future, ranging from deploying multiple probes on the moon to placing a lander on Mars to fetch dirt and rocks and return them to Earth.

Scientists and engineers are also racing against time to develop a super-powerful rocket to land Chinese astronauts on the lunar soil.