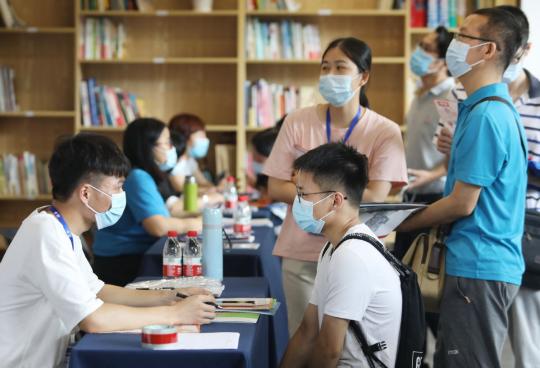 Students who are graduating talk with job recruiters at a career fair in Dongguan, Guangdong province, on July 11, 2020. (Photo by Zheng Zhibo/For China Daily)

The surveyed unemployment rate was 5.1 percent in July, up 0.1 percentage points from a month earlier. The rate was 16.2 percent and 4.2 percent for the 16-24 and 25-59 age groups, respectively, the bureau said.

Further, weekly working hours for employees of enterprises was 47.7 hours, from 47.6 in June, it added.

The rate is calculated based on the number of unemployed people who participated in an employment survey in urban areas, including migrant workers in cities.