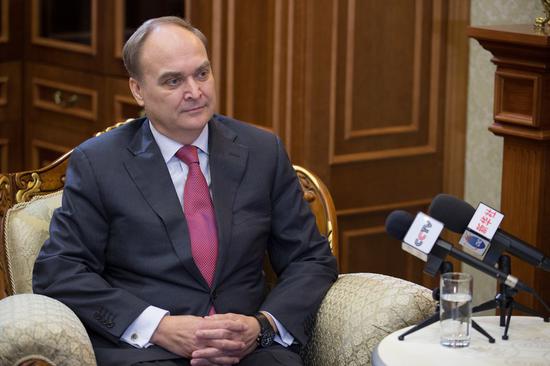 The Russian ambassador to the United States said that Washington had asked 24 Russian diplomats to leave the country by Sept. 3 due to visa expiration.

"We received a list of twenty-four diplomats who are expected to leave the country before September 3, 2021," Russian Ambassador Anatoly Antonov said in an interview with the Washington-based The National Interest published on Sunday. "Almost all of them will leave without replacements because Washington has abruptly tightened visa issuing procedures."

Antonov said that "last December the State Department unilaterally established a three-year limit on the assignment period for Russian personnel in the United States that, as far as we know, is not applied to any other country."

U.S. State Department spokesperson Ned Price responded on Monday that Antonov's "characterization of the situation is not accurate. It's incorrect."

"The three-year limit on visa validity for Russians, it's nothing new. When visas expire ... these individuals are expected to leave the country or apply for an extension. That is what is at play here," he told reporters during a daily briefing.

The Russian ambassador's interview came two days after the State Department said it had laid off 182 local employees and dozens of contractors at U.S. diplomatic facilities in Russia as requested by Moscow.

Price on Monday denied that the United States is using Russian diplomats' visas to retaliate while saying "we reserve the right to take appropriate response measures to Russia's actions."

The Russian Foreign Ministry in April announced a complete ban on U.S. diplomatic missions from hiring citizens of Russia or third countries to administrative and technical posts in response to U.S. sanctions and expulsion of Russian diplomats.