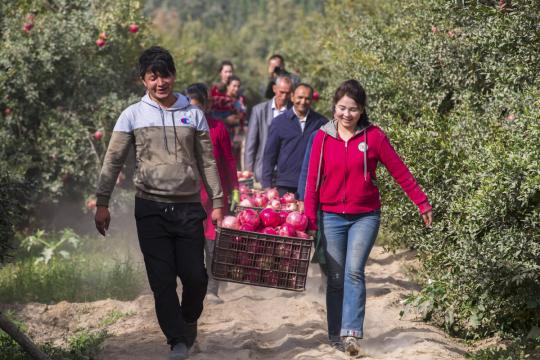 Many foreign reports and publications about the Xinjiang Uygur autonomous region, including documentaries and books that contain secretly filmed footage, speculation based on satellite images and presumptions of guilt, are fabrications with the purpose of tarnishing the image of Xinjiang, a regional official said.

"The production of such cultural products is often backed by Western anti-China forces. For their producers, there is no bottom line when it comes to distorting facts," Bahtiyar Bawudun, vice-chairman of the Federation of Literary and Art Circles of Xinjiang, said at a Friday news conference in Beijing.

In one case, the Public Broadcasting Service from the United States accused a Xinjiang company of helping the authorities test and use sophisticated surveillance technology against members of the Uygur ethnic group, Bahtiyar said.

In an episode of a documentary series titled "China Undercover" that first aired on PBS in April 2020, people can see footage of a meeting arranged between undercover PBS reporters and a representative of Leon Technology, which is based in the regional capital of Urumqi and specializes in security software and telecommunications solutions.

Zhou Lu, chairman of the company, said two reporters came to the company posing as businesspersons seeking cooperation. "They tricked a company representative into saying what they wanted to hear while recording the talks with a secret filming device," Zhou said in an earlier interview.

To make more deals, the representative exaggerated some of the facts about the company, Zhou said.

"The visitors were very cunning and took advantage of the representative's eagerness, and edited the footage to make it look like the company had been providing oppressive technology," Zhou said.

The representative, who wishes to remain anonymous, admitted to the exaggerations he made but was still shocked after watching the episode. "I have no idea why they didn't use my original quotes. Instead, they have changed what I meant by editing the footage. It's not a documentary but a fake story," the representative said.

Besides distorting facts, even the main characters in many Xinjiang-related reports are fake, said Xu Guixiang, a spokesman for the regional government. "Such products have a rotten smell and create a bad impact in the international community."