Nanjing explains how virus was transmitted 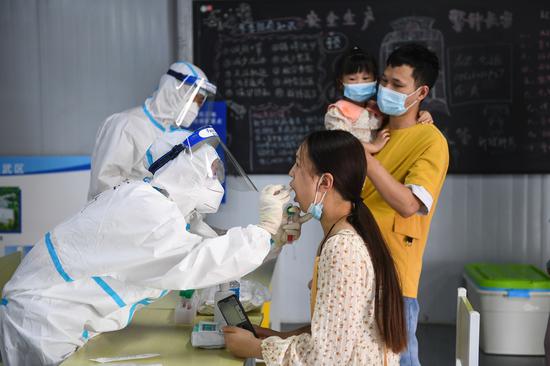 A medical worker takes a swab sample from a woman for COVID-19 test at a testing site in Nanjing, East China's Jiangsu province, July 29, 2021.(Photo/Xinhua)

Health authorities in Nanjing, Jiangsu province, confirmed that gene sequences from samples collected from the city's recent COVID-19 patients were consistent with those of an imported case from Russia.

Ding Jie, deputy director of the Nanjing Center for Disease Control and Prevention, said the samples were collected from aircraft cabin cleaners at Lukou International Airport, who were among the first to be confirmed with COVID-19 in the latest outbreak.

They had cleaned Flight CA910, which had arrived in Nanjing from Russia on July 10 and carried a passenger who has been confirmed with the coronavirus, she said.

"We have finished sequencing the viruses collected from 52 local transmissions," Ding said at a news conference on Friday. All the infections were confirmed as the Delta variant.

"The sequencing showed that they were highly homologous, which implies that these people were infected in the same transmission chain," Ding said.

Evidence indicated that the aircraft cabin cleaners might be infected because they have failed to follow regulations when they removed their protective clothing and washed themselves.

The cleaners then transmitted the virus to other cleaners after being infected. Airport workers from other departments were also infected by the cleaners or the polluted environment, because the cleaners dealt with trash on both domestic and international flights, Ding said.

Nanjing has launched a third round of nucleic acid testing for its 9.3 million residents on Wednesday. Fifteen people have tested positive among the 6.43 million who participated in the tests as of 7 a.m. on Friday.