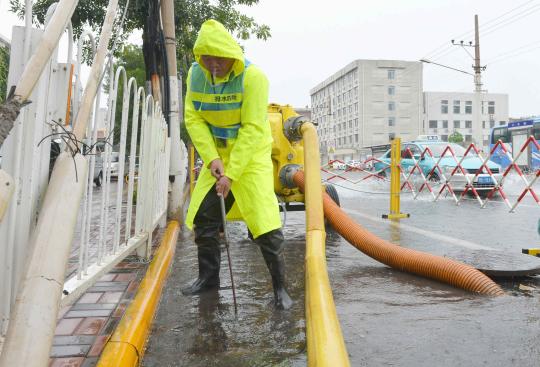 A worker drains floodwaters on a road in Tianjin on Thursday. Typhoon In-Fa brought heavy rainfall to the city. (ZHOU WEI/FOR CHINA DAILY)

The disaster emergency response level for Central China's Henan province was raised on Thursday as the local death toll from flooding rose to 99.

The provincial government said heavy rainfall and flooding had affected more than 13.91 million people by noon Thursday, wiped out over 198,200 hectares of crops and led to the collapse of about 18,000 houses, causing direct economic losses of nearly 91 billion yuan ($14.08 billion).

At 10 am Thursday, the China National Commission for Disaster Reduction and the Ministry of Emergency Management decided to raise the emergency disaster response from level three to level two to further support disaster relief and recovery.

From 7 am Wednesday to 7 am Thursday, heavy rain caused by Typhoon In-Fa hit six cities in Henan, and 65 weather stations in the province recorded rainfall in excess of 100 millimeters during the period, Li Changxun, deputy head of the province's emergency management department, said on Thursday.

Xunxian county and Qixian county in Hebi in northern Henan have been badly affected by floods. Hong Limin, executive vice-mayor of Hebi, said that several main rivers and canals pass through the two counties, and six of the province's 13 flood-storage areas are located there. The storage areas, which are adjacent to each other, are accumulating even greater quantities of water.

As a result, both counties have experienced severe water seepage, with dikes overflowing and breaching and mountainside torrents making flood control difficult. As of 8 pm Wednesday, about 588,000 people in Xunxian county and 172,000 people in Qixian county were affected by the floods, Hong said.

A videoconference was held on Thursday on preventing flood and typhoon damage. It was attended by representatives of the State Flood Control and Drought Relief Headquarters, and the ministries of emergency management, water resources, and natural resources, as well as the China Meteorological Administration. The meeting tasked authorities with stepping up disaster relief work in Henan, accelerating the draining of floodwaters and thoroughly verifying the situation.

Authorities were also asked to pay close attention to the path of Typhoon In-Fa and flooding in the basins of the Yellow, Haihe and Liaohe rivers, strengthen dike patrols and deploy rescue forces ahead of potential emergencies.

In-Fa reached Shandong province on Thursday. Due to the combined influence of the typhoon and cold air from the north, heavy rain is expected to hit northern Shandong, the Beijing-Tianjin-Hebei region, the eastern part of the Inner Mongolia autonomous region and the central and western parts of Northeast China over the next three days, the meteorological administration said.

The Beijing weather authority issued a blue alert at 6 am Thursday. Rainfall started at around 2 pm that afternoon and is forecast to last until 8 pm Friday. The capital has taken multiple measures, including introducing flexible working hours and temporary transportation controls, to cope with the expected strong rains.