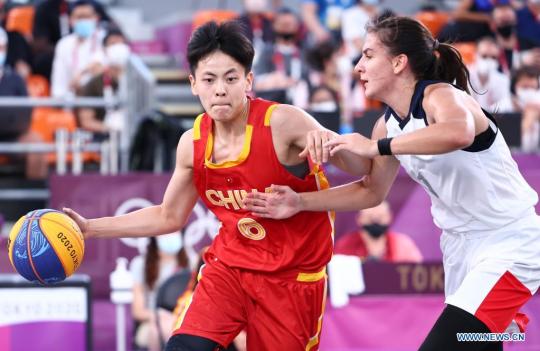 After years of waiting for a team sports medal in Olympic basketball, the Chinese Women's 3X3 Basketball Team delivered a bronze medal to those dreamers on Wednesday, defeating France 16-14 at Japan's Aomi Urban Sports Park.

Winning a medal at the Olympic debut of basketball's half-court version at the Tokyo 2020 Olympic Games, Wang Lili of Team China couldn't hide her excitement at being able to hold off France's last-second attempt to tie the game.

"The game was very tough. It was up and down the whole game, but we managed to be on top in the end," Wang said. "We're very excited, because we've won the bronze medal the first time that 3x3 basketball has been in the Olympics. It's more than we expected."

The last time China won an Olympic medal in basketball was at the 1992 Barcelona Games, when the women's squad finished runner-up in the game's ordinary 5-a-side version.

Besides the good news from the basketball court, Team China also gained No 2 position in the medal tally on Wednesday as it clinched three golds in a row and broke the world record in women's quadruple sculls. 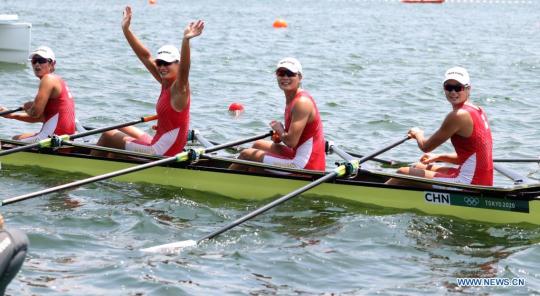 Chinese rowers celebrate after winning the women's quadruple sculls final at the Tokyo 2020 Olympic Games in Japan on Wednesday. [PHOTO/XINHUA]

Wang Zongyuan and Xie Siyi, even with an uncharacteristic error on their fifth dive, led all the way in winning the men's 3-meter synchronized springboard with 467.82 points, earning the Chinese diving team its third gold medal at the Tokyo Aquatics Center.

Wang and Xie hugged each other after they reclaimed the gold medal in the only diving event that China didn't win five years ago in Rio de Janeiro.

"We were really feeling relieved,"19-year-old Wang said after winning the competition. "Three hours ago, I was an unknown athlete. Now I can say I'm a winner of the Olympics."

Xie explained the team's advantage by saying they helped each other endure a long training process.

In the women's quadruple sculls event, Lyu Yang, Zhang Ling, Cui Xiaotong and Chen Yunxia wrapped up a record-setting first day of rowing finals by finishing in 6 minutes 0.13 second, shaving nearly two seconds off the previous mark set by the Netherlands in 2014.

"I always was so close to making the podium," she said. "To now finally be able to (win a) medal means so much."