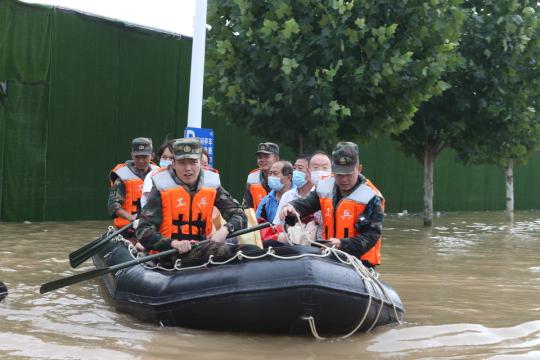 Amid a "grave and complicated "flood control situation, the Ministry of Emergency Management has demanded that local authorities nationwide enhance early warning measures and thoroughly check urban areas at risk of flooding, including subways, to ensure people's safety.

The ministry also demanded that subway operators suspend their operations and evacuate passengers in the event of extremely heavy rainfall, according to a media release from the ministry on Tuesday.

This came after deadly torrential rain in Central China's Henan province claimed at least 71 lives, including 14 subway passengers in Zhengzhou, the provincial capital.

Subway builders and operators should examine their flood precautions and identify all possible gaps, according to the release.

As a priority task, they should check the drainage facilities in key locations such as stations in low-lying areas.

"In case of rainfall beyond the facilities' designed capacity and other extraordinary situations, they should respond by suspending train operations, evacuating passengers and closing stations in a timely manner," it said.

It also called for thorough inspections of tunnels, culverts, transportation hubs and airports to remove obstacles that may hinder flood discharge and to clearly identify areas where hazards exist.

"When extreme weather occurs, measures such as traffic control and road closures should be taken," it said.

According to Zhengzhou authorities, tunnels are also major locations where casualties occur during flooding.

For example, six people were found dead in three separate sections of tunnels on the city's Jingguang Expressway, Zhang Jiangtao, deputy secretary-general of the Zhengzhou city government, said at a news conference on Monday.

He said 247 cars had been recovered from the tunnels, as rescuers made consistent efforts to pump water out.

Local transportation authorities should prepare for the worst possible scenario and take precautionary measures, it said, adding that early warning systems for impending extreme weather and emergency response measures should be enhanced.

It pledged support for Henan and other flood-stricken regions affected by Typhoon In-Fa, which landed in Zhejiang province on Sunday.

More rescuers will be sent to help residents trapped by floods in the worst-hit areas in Henan, such as Zhengzhou, Xinxiang and Hebi, to minimize casualties and economic losses, it said.