U.S. urged to break away from hostile China policy 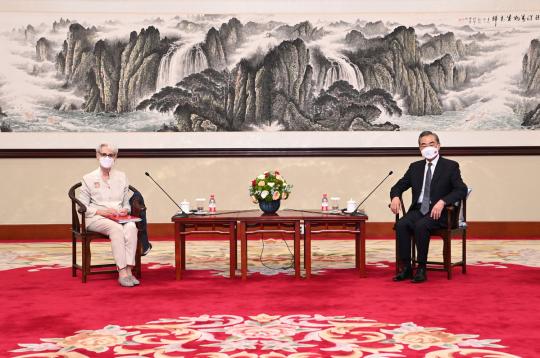 State Councilor and Foreign Minister Wang Yi meets with U.S. Deputy Secretary of State Wendy Sherman in Tianjin on Monday. Wang urged the United States to abandon its arrogance and prejudice and steer back to a rational and pragmatic China policy. (LI RAN/XINHUA)

In the latest talks and meeting with visiting United States diplomats, Beijing has drawn lines for managing bilateral divergence to prevent it from spiraling out of control, and the ball is now in Washington's court to respond with goodwill, not the opposite, experts said.

Sherman was in Tianjin for a talk with Vice-Minister of Foreign Affairs Xie Feng that lasted for more than four hours on Monday morning.

Beijing believes that dialogue will help chart a path for the two countries' peaceful coexistence, and that their win-win interactions will benefit the world as well, Wang said.

The U.S. treats China as a competitor and rival, and it attempts to interrupt China's modernization process, Wang added.

Washington is expected to "break away from pride and prejudice", stop lecturing and return to a reasonable policy approach toward China, Wang said.

Sherman said the U.S.-China relationship is the most important bilateral relationship in the world, and she reiterated that the U.S. adheres to the one-China policy and does not support "Taiwan independence".

Xu Yicong, a researcher at the China Foundation for International Studies and a former Chinese ambassador to Cuba, said, "The visit and comments made by both sides show that policymakers in both China and the U.S. are well aware of the relationship's importance and the need to work together to maintain necessary and close communication."

To keep contacts afloat between the two countries, "a face-to-face, clear presentation of positions and concerns on core issues is the only viable way, and there is no alternative", Xu said.

The U.S. must not seek to obstruct or even break China's development process, and it must not infringe upon China's national sovereignty, let alone undermine China's territorial integrity, Wang added.

Allegations related to Xinjiang, Tibet and Hong Kong have nothing to do with human rights and democracy, but separatism instead, Wang said.

Sherman said that the U.S. has no intention of curbing China's development and does not want to contain China, and that it is good to see China achieve development.

The two sides can carry out benign competition, cooperate in dealing with climate change, drug control and international hot spot issues, enhance their abilities in crisis management and control, and avoid conflicts, she added.

Diao Daming, an associate professor of U.S. studies at the School of International Studies of Renmin University of China, said, "If Washington really takes heed of what Beijing has said and is ready to rectify its wrong approach and put the ties back on track, it should take more actions as positive feedback."

He also noted that "China is still honoring the tradition of 'dialogue is better than confrontation', and this manifests China's great sense of duty in securing global prosperity and stability by tackling ties with the U.S.."

During her China visit, Sherman mentioned the concept of "rule-based international order", a phrase U.S. diplomats have frequently used recently.

Wang Yi responded by telling her that "the U.S. should be the country that should reflect most in terms of abiding by international rules".

The high tariffs imposed by the U.S. on China are a violation of World Trade Organization rules, Wang said.

Wu Xinbo, dean of the Institute of International Studies at Fudan University, said: "A competition in a neutral sense is to win the game by constantly improving oneself. But the 'competition' by the U.S. is not by improving itself but by suppressing China."

Although some in Washington have claimed that U.S. engagement with China has failed, the U.S. "still looks to carry out substantial, constructive contacts and dialogue with China, like the talks in Tianjin. Its mindset could be defined in one word: paradoxical," Wu added.