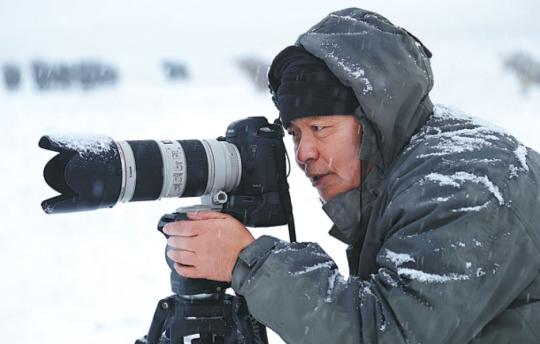 "Cease to struggle and you cease to live." This is the motto Ge Yuxiu lives by. "I am still not too old to move. I can still do something," he said while smiling.

The 68-year-old Shandong province native has lived in Qinghai province for 51 years. For almost half that time, he has been on the Qinghai-Tibet Plateau, where he has devoted his life to photographing and protecting wild animals.

Despite serious heart trouble, Ge is determined to stay on the high-altitude plateau and continue to do something to help conserve wildlife in the area, which is sometimes called the "Third Pole" for the amount of water stored in its glaciers.

Ge came to Qinghai to serve in the People's Liberation Army in 1970. He was lucky enough to gain access to a camera after he became company commander eight years later.

His enthusiasm for photography grew after a photo he took of soldiers reading news articles written on a blackboard was published in the Qinghai Daily in 1979.

He probably would never have turned to photographing wild animals without a visit to Bird Island in Qinghai Lake－China's largest inland saltwater lake－in 1995, after he had retired from the army and had begun working in financial sector.

A herd of Przewalski's gazelles runs on the grassland in Qinghai. [Photo by Ge Yuxiu/for China Daily]

Covering less than half a square kilometer, the island is home to over 100,000 migratory birds. "I became addicted to the bird kingdom," Ge said, adding that he has so far visited the island more than 200 times to take photos.

He never anticipated that his attraction to the island would tie his destiny with Przewalski's gazelle, a relatively small, slender antelope endemic to China.

Ge was en route to the island in late 1997 to take photos of swans when he saw seven yellowish-brown animals running across the grasslands, in a line. On hearing one of his companions shout "Przewalski's gazelle", he took out his camera and took photos of them.

He was later told by wildlife conservation experts that he had captured the world's first image of the elusive antelope.

"I was so excited to hear that," he said.

His excitement, however, soon gave way to anxiety after he learned about the animal's endangered status. Only found around Qinghai Lake, there were just 300 of them surviving in the wild at the time.

The incident became a turning point in Ge's photography career, as he decided to devote his efforts to saving the gazelle and other endangered animals.

He often spent time in the wild observing the gazelle and occasionally visited local herdsman to learn what they knew about the animal.

As he followed the animals, danger was never far away. One early winter morning, Ge fell asleep while hiding near the antelopes' habitat. Woken up by howls, he saw that five wolves were chasing a gazelle about 100 meters away.

The herd was only 30 meters away when it passed the sand dune Ge had hidden behind. Though the wolves didn't find him, he was so scared that he became drenched in sweat despite subzero temperatures.

"It would have been a lot easier for the wolves to catch me than to catch that antelope," he said, a trace of fear still in his eyes.