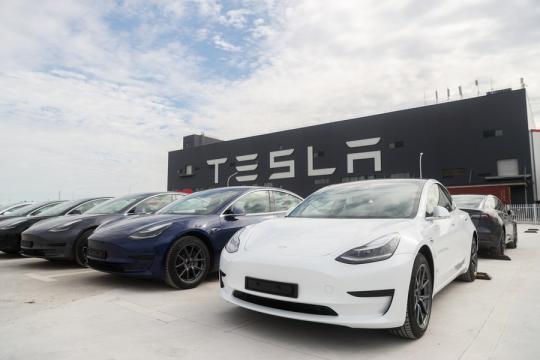 U.S. electric vehicle maker Tesla said Monday that it earned $11.96 billion in total revenues in the second quarter of fiscal 2021, up 98 percent over the previous year.

Tesla posted $1.62 billion in non-GAAP (generally accepted accounting principles) net income for the quarter that ended on June 30, representing a 258-percent increase over the previous year.

Its cash and cash equivalents in the second quarter reached $16.23 billion dollars, up 88 percent year-on-year.

In the second quarter, Tesla achieved the highest ever vehicle production and deliveries. The total production reached 206,421, an increase of 151 percent year on year. The total deliveries amounted to 201,304, up 121 percent from a year ago.

According to Tesla, supply chain challenges, in particular global semiconductor shortages and port congestion, continued to be present in the quarter. With global vehicle demand at record levels, component supply will have a strong influence on the rate of delivery growth for the rest of this year.

Per the company's planned roadmap, Tesla recently introduced a standard range version of Model Y in China. "Due to strong U.S. demand and global average cost optimization, we have completed the transition of Gigafactory Shanghai as the primary vehicle export hub," Tesla said.

"While we experienced minor interruptions due to supply chain challenges and factory upgrades, production in Shanghai remained strong," it added.