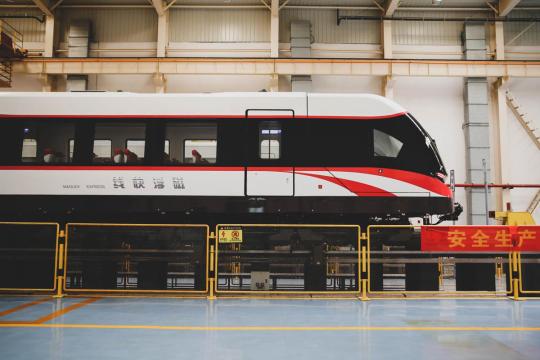 A magnetic levitation train that can run 140 kilometers per hour entered service on Thursday in Changsha, Hunan province, slightly shortening the travel time of the Changsha maglev express line and bringing other benefits, according to Changsha Metro Group.

The speed of the previous maglev trains was around 100 to 110 km/h on the 18.5 km line. The newly added train runs 140 km/h, cutting the travel time by about three minutes. It can also be used in more conditions, said Zhou Xiaoming, general manager of Changsha Metro Group and Party secretary of Hunan Maglev Group.

The new maglev is environmentally friendly because it runs in virtual silence. It can also run on elevated viaducts, bringing down construction cost, he said.

"The train has several new abilities, including a way to maintain stability in various conditions at 140 km/h," Zhou said.

The city's maglev express has operated more than 1,880 days without an accident, he said.