A meeting that changed history 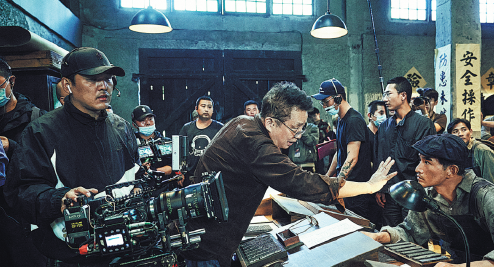 Director Huang Jianxin (center) gives instructions on the set of 1921. The film retraces the birth of the Communist Party of China in the turbulence of a century ago. [Photo provided to China Daily]

Ten years after the revolutionary blockbuster Beginning of the Great Revival was released, a new film, tracing the formation of the Communist Party of China 100 years ago, is set to open on Thursday.

Veteran filmmaker Huang Jianxin, who co-directed the movie with Han Sanping, had often pondered on revisiting the history with a more human-interest and dramatic tune. And, with the release of 1921－the biggest tribute film to mark the centenary of the Party－the 67-year-old auteur has fulfilled his wish.

As of Wednesday, a day before its nationwide release, the movie raked in more than 92 million yuan ($14.25 million) in presale receipts, making it quite possibly the new domestic box-office champion, according to industry observers.

The film is also set to be released in the United Kingdom, Ireland and the United Arab Emirates, its distributors say.

Besides, it will also be simultaneously released to the North American audience via Smart Cinema USA, a mobile cinema app.

Unlike Beginning of the Great Revival, which covers 1911-21, the latest film is narrated over a shorter and more compact course in the title year, when the Party held its first National Congress in Shanghai and Jiaxing, Zhejiang province, in the summer of 1921, laying the foundation for its rise.

Continuously employing the successful stardom formula, an innovation for revolutionary films starting from The Founding of a Republic (2009), which was also jointly directed by Huang and Han, 1921 casts legions of A-listers to play historical figures, ranging from the founding members of the CPC to political celebrities and the notorious Chinese police officers in Shanghai's foreign concessions.

Actor Wang Renjun reprises the character of Chairman Mao Zedong after his 2019 military film, The Bugle of Gutian.

Recalling that he was invited to return to the familiar subject in 2016, director Huang Jianxin, who also serves as the executive producer, says it was stressful to seek a breakthrough in storytelling, as he worried that old-school filmmaking would fail to hook young people, the mainstream theatergoers.

Newly discovered documents from the early 1920s, especially from archives in Europe and Japan, have helped the creators to piece together the backgrounds of the 13 representatives, including New China's first leader, Mao, who gathered for the first Party congress.

"We also wanted to retell the history from an international point of view. The founding of the CPC was helped by overseas communists, making it possible to conceive parallel plotlines taking place overseas," says Huang Jianxin.

Led by Vladimir Lenin, the Moscow-headquartered Communist International (1919-43) assigned Dutch communist Henk Sneevliet, who went by the pseudonym Maring, and Russian delegate Nikolsky to help Chinese people to found the CPC in 1921, according to records.

Coupled with inspiration from an unsealed archive found in Japan, the film 1921 adds espionage genre elements, exemplified by scenes featuring a Japanese spy sent to Shanghai and the two Comintern delegates escaping in a death-defying car chase.

"When we were conducting our research, we found that Japan was keeping a close eye on the communist activities in the period－it actively supported and nurtured pro-Japan forces in China," says Zheng Dasheng, a Shanghai native and co-director of 1921.

"Besides, the situation in Shanghai was quite complicated with the foreign settlements."

For directors Huang Jianxin and Zheng, their other goal was to explore and explain how the faith of communism was shaped, hence helping a wider viewership to understand why revolutionary pioneers risked their lives to pursue the rise of China amid the warlords' disunity and foreign oppression.

"The average age of the 13 delegates who took part in the first CPC National Congress was around 28 years old. There were about 50 members when the Party was founded in 1921, and it was those people who had changed the fate of our country," Huang Jianxin says.

"It was also the original impetus to drive us to work on the project for five years," he adds.

In an effort to ensure historical reality, the crew built real-size replicas of the sites of CPC's first and second National Congress and Bowen Girls' School, where the first congress delegates were accommodated for safety concerns.

Besides, some historical details, such as rickshaw license plates from Shanghai－usually each installed with two plates respectively for being allowed to move around the foreign concessions and other areas of the city－are reflected in the film.

With some imagination, based on documents from Chinese and foreign archives and libraries, character arcs are also convincingly developed, according to some critics who saw previews.

Such scenarios include Li Da's romantic moments with his newlywed wife; Mao and several delegates asking a laundry's employee to help them wash the suits they would wear for the National Congress; and He Shuheng, the oldest of the 13 delegates, urging Mao to bid farewell to his wife shortly before their ship sailed from Hunan province for Shanghai.

"The film skillfully blends suspense and history to take a retrospective look at the first batch of CPC members' endeavor to save the nation from subjugation and ensure its survival," says Rao Shuguang, head of the China Film Critics Association.

"It has also updated filmmaking and storytelling techniques for revolutionary features."