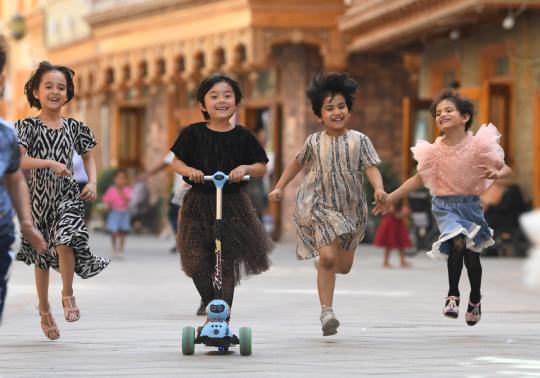 Children play in Dove Lane, in the old town of Tuancheng in Hotan, Xinjiang Uygur autonomous region. （Photo by SADAT/Xinhua）

The population of China's Xinjiang Uygur autonomous region increased by 18.52 percent from 2010 to 2020, the latest census data shows.

The region's permanent population reached 25.85 million by October 2020, 4.04 million more people than in China's sixth census in 2010, according to census data the regional statistics bureau released on Monday.

Xinjiang's population grew by 18.52 percent, which is 13.14 percentage points higher than the national average over the past decade, it said.

Over the decade, Xinjiang's population has stably increased, people's education levels have been considerably improved, and population mobility and the urbanization development level have grown, the statistics bureau noted.

Education attainment has increased in the region, with people receiving a better education and more years of schooling, the official statement said.

Compared with the sixth national census in 2010, the average years of schooling for people in Xinjiang aged 15 and older increased from 9.27 years, in the 2010 census, to 10.11 years.

In addition, the regional population is somewhat younger than elsewhere in China.

The number of people aged 60 or older in Xinjiang stood at around 2.92 million, or 11.28 percent of the population, which is 7.42 percentage points lower than the national average.

Meanwhile, the number of people of the Han ethnic group living in the region rose by more than 2.17 million, an increase of 24.86 percent.

The statement explained that the Han is the fastest growing ethnic group in the region mainly because of the increase in the number of migrant workers from other parts of China.

With stable socio-economic development in Xinjiang in recent years, the region has attracted talents and investors to work or start business, ensuring a steady growth of the local population, it said.