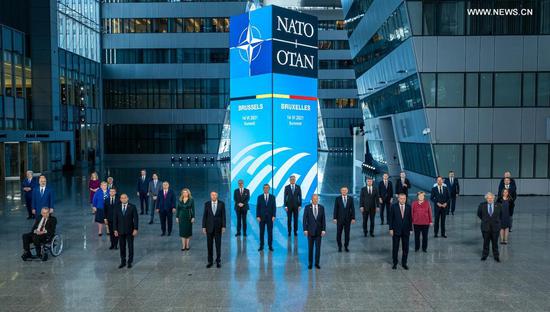 Leaders of the North Atlantic Treaty Organization (NATO) held a face-to-face summit on Monday to show their unity and agreed on the "NATO 2030" agenda to address future challenges.

The summit of the 30-member NATO was the first for U.S. President Joe Biden after the tumultuous four years seen under his predecessor Donald Trump, who called the military alliance "obsolete."

The summit was part of Biden's first foreign trip since he took office, as he aimed to rebuild the transatlantic relations after the Trump era. He joined the G7 summit on June 11-13 in Britain where his repeated message was "America is back."

However, some observers believe the transatlantic relations cannot go back to the good old days due to the past four years of experience as Trump kept denouncing European partners in almost every aspect.

"A lot of Europeans will be very cautious when it comes to this renewal of transatlantic relations, because they have experienced," Julian Mueller-Kaler, a researcher with the Berlin-based German Council on Foreign Relations (DGAP), told Xinhua.

Mueller-Kaler added that the transatlantic cooperation during the Obama era cannot return because this is no longer 2008. Both power relations and dynamics in the world have changed. "It will be important to find answers for the world that we live in, and not necessarily go back to bygone times."

The leaders agreed on the "NATO 2030" agenda, a comprehensive initiative about making sure the alliance remains ready today to face tomorrow's challenges, said the communique of the summit.

According to the agenda, NATO will strengthen political consultation and the resilience of society, reinforce defense and deterrence, sharpen the technological edge, and develop its next Strategic Concept in time for the summit in 2022.

The leaders also took decisions on the newest operational domains: cyber and space. The bloc agreed on a new cyber defense policy, which recognizes that cyberspace is contested at all times and ensures that the bloc has strong technical capabilities, political consultations, and military planning in place to "keep our systems secure."

In terms of Russia, NATO leaders said that they were open to a political dialogue with Russia but remained "clear-eyed" about the challenges it allegedly poses.

The NATO summit has been viewed by some observers as an opportunity for the United States to form a joint front against China.

However, when it comes to China, European allies' opinions and interests are different from Washington's. After the summit, German Chancellor Angela Merkel said NATO's decision to name China as a challenge "shouldn't be overstated" because China, like Russia, is also a partner in some areas.

"From my point of view, one shouldn't overestimate China even now. We have to find the right balance," Merkel told reporters in Brussels.