Inflation this year to be kept within range 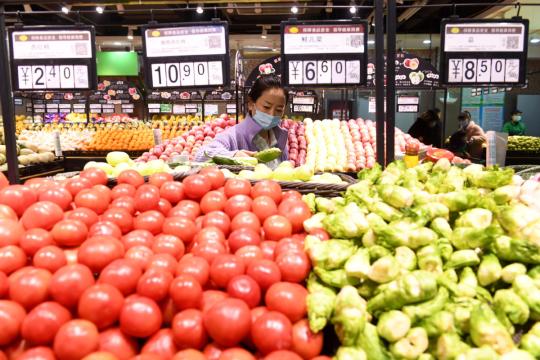 Any major risks brought by surging inflation will remain at bay in China over the coming months amid falling pork prices and a moderate recovery in domestic demand, officials and experts said on Friday.

Yet they still stressed the need to closely monitor risks surrounding rising global commodity prices as they could deteriorate manufacturers' profitability and spark investor jitters over monetary tightening.

China's consumer price index, a main gauge of inflation, grew 0.4 percent year-on-year last month, versus a 0.2 percent decline in February, driven by rallying oil prices, recovering service sector prices and the alleviating effect of a high comparison base, the National Bureau of Statistics said on Friday.

Rising prices of commodities like oil and basic metals also pushed up China's producer price index, which gauges factory-gate prices, the NBS said. Led by sectors such as metal smelting and oil extraction, the PPI rose by 4.4 percent year-on-year last month, up from 1.7 percent in February and marking the highest level in more than two years.

The numbers came amid growing concern over a commodity-driven sharp global inflation spike that could force central banks to tighten policy ahead of schedule and cause market volatility.

The risks have attracted the attention of China's top policymakers. The State Council's financial stability and development committee has called for efforts to stabilize prices and to keep a particularly close eye on commodity prices, according to a statement released on Thursday after a committee meeting.

Peng Shaozong, a National Development and Reform Commission official, said the increase in production materials will not last long and the growth in PPI is expected to fall from the second half of the year, China Central Television reported on Friday.

Lu Ting, Nomura's chief China economist, said the country's inflation may rise in the coming months amid increasing commodity and service sector prices, but will remain below the government's control target and therefore will not derail the Chinese central bank's commitment to "no sharp policy shift".

"With inflation on the rise across the world, China is benefiting from falling pork prices as a result of the containment of African Swine Fever, which could be a strong offset to rising global commodity prices," Lu said.

Other than falling pork prices, a modest recovery in domestic demand will also offset inflationary pressure, given that household income recovery is less than ideal while the job market has yet to fully stabilize, said Li Qilin, chief economist at Hongta Securities.

The NBS reported that growth in core CPI, which excludes food and energy prices to better reflect real demand, came in at 0.3 percent last month, up from zero in February, signaling that the recovery in domestic demand is on track but sluggish.