Hainan to be focal point of reforms 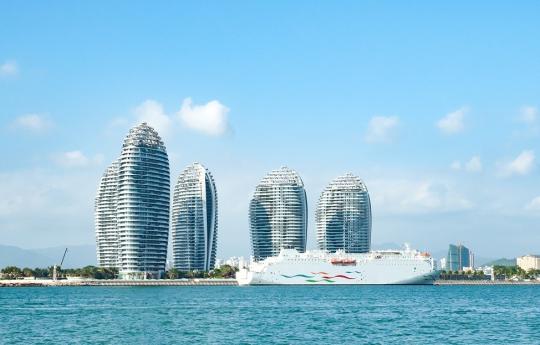 A view of Sanya Bay in Hainan province. （Photo provided to chinadaily.com.cn）

The central government on Friday launched a series of financial measures to turn Hainan Free Trade Port into a focal point of China's deepened reforms, showing the nation's latest efforts to further open up to the world, said experts.

The guideline will also help to strengthen Hainan's weak links and consolidate its financial base, the central bank said on its official website.

Chi Fulin, president of the Haikou-based China Institute for Reform and Development, said that financial opening-up is integral to systematic policy innovation in Hainan. In order to facilitate the flow of cross-border capital, financial reform and innovation is vital while offshore financial businesses should play a bigger role in Hainan, he said.

Under the recently announced guideline, the financial market in Hainan should shoulder more responsibility in serving the real economy. As such, competitive companies in Hainan are encouraged to go public or to expand via the multi-tranche equity market in the area, according to the guideline. Mergers and acquisitions aimed at transformation and industrial upgrading are supported, while qualified companies based in Hainan will be encouraged to issue corporate bonds.

Further financial opening-up is another highlight of the guideline. Banks in Hainan are encouraged to introduce qualified overseas strategic investors to improve their equity structure. By working more closely with insurers in the Hong Kong and Macao special administrative regions, Hainan should seek opportunities in offshore reinsurance businesses. Overseas institutions are allowed to set up wholly owned or jointly held futures companies in the area. Foreigners working in Hainan are allowed to participate in domestic securities investment.

"The supportive policies announced today will help to attract more international institutions and capital, providing capital support for the construction of various projects, including infrastructure projects. The measures will activate Hainan's financial market in all aspects and accelerate the construction of Hainan Free Trade Port," he said.

Meanwhile, Hainan is allowed to carry out the outbound investment Qualified Domestic Limited Partner scheme. Qualified Foreign Limited Partners in Hainan are also allowed to freely manage their capital based on their balance. In addition, the foreign exchange registration process will be simplified.

Experts from Jingtian &Gongcheng Law Firm explained in a note that foreign equity investment firms will meet no threshold under the QFLP management rules in Hainan, and stand on a totally equal footing with similar domestic firms. The negative list mechanism is adopted for the investment scope of QFLPs in Hainan, which will help more foreign capital to invest in private equities and venture capital in the area.

Tao Jin, deputy director of the macroeconomic research center of the Suning Institute of Finance, said that Hainan Free Trade Port has gained paramount policy support, which will be translated into an unprecedented concentration of resources. The area's economic scale and efficiency will thus be largely enhanced. Successful experiences in Hainan are also likely to be promoted nationwide in the future, he said.

A master plan for Hainan Free Trade Port was released in June, which requires establishing a basic free trade port policy system with a key focus on facilitating free trade and investment by 2025.

By 2035, the free trade port system and operations in Hainan will be more mature. By the middle of the century, a high-level free trade port with strong international influence will be fully established, according to the plan.