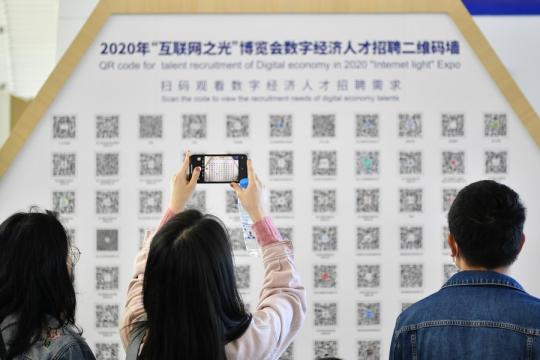 A visitor scans the QR code to learn about recruitment needs of digital economy talents during the Light of Internet Expo of the 2020 World Internet Conference in Wuzhen, East China's Zhejiang province, Nov 22, 2020. (Photo/Xinhua)

According to the Ministry of Industry and Information Technology, by the end of last year, the value-added of core industries of China's digital economy account for 7.8 percent of GDP, with obvious enhancement in quality and efficiency.

China has put more effort into promoting the development of the digital economy in recent years, providing strong support for building a Digital China, said Yang Yuyan, director of the information technology development bureau of the ministry.

China has built the largest fiber-optic and 4G networks in the world, with the number of 5G terminal connections surpassing 200 million.

The government sped up digital transformation and promoted the construction of industrial internet. At present, China has established more than 80 influential industrial internet platforms, with the number of industrial applications surpassing 350,000, providing strong support to enhance quality and efficiency while reducing costs.

In terms of information consumption, the nation actively cultivated and popularized data-driven new business modes and patterns. It is worth mentioning that online education, telecommuting and online shopping played an important role during the fight against COVID-19.

Next, the nation will speed up the development of digital industrialization and industrial digitization, improve the digital governance system and promote digital services, said Sun Wei, director of the innovation and high-tech development bureau of the National Development and Reform Commission.

China will promote rapid growth of digital economy and strengthen innovation application of key digital technologies, Sun added. The government will drive the reform of modes of production, living and governing via digital transformation to promote high-quality development.