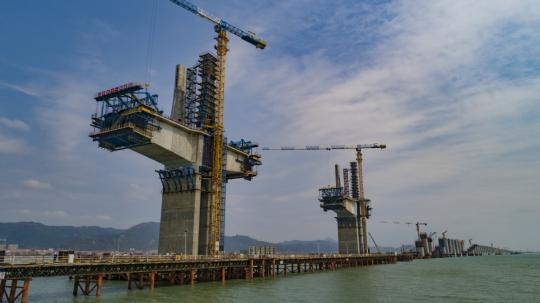 The Meizhou Bay Cross-Sea Bridge, a pivotal section of the Fuzhou-Xiamen High-speed Railway in Fujian province, is under construction. （Photo provided to China Daily）

The tops of the two main towers of a bridge on China's first cross-sea high-speed railway line were sealed recently, marking a major step in its construction, the company that will operate the line said on Sunday.

The bridge is a major project on a high-speed railway line linking Fuzhou and Xiamen in Fujian.

The 277-kilometer line, with a designed speed of 350 km per hour, will have seven stations and pass major cities in Fujian, including Fuzhou, the provincial capital, Putian, Quanzhou and Xiamen. It will halve travel time between Fuzhou and Xiamen to one hour.

The railway, expected to open next year, will be an important link in China's high-speed railway network.

Another railway line, linking Fuzhou and Pingtan, an island county in Fujian, opened in December. Linking the island to the national network, it operates at 160 to 200 km/h, below the 250 km/h bench mark China uses in categorizing high-speed lines.

The island is the closest place on the Chinese mainland to the main island of Taiwan.