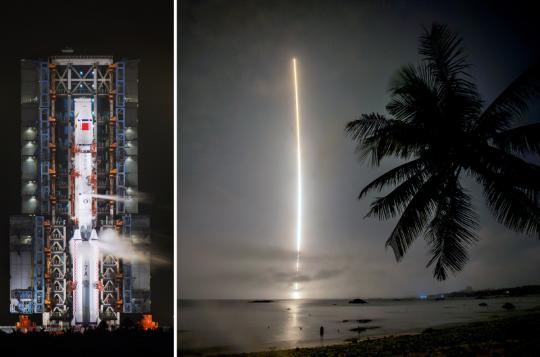 Left: A Long March 7A carrier rocket is ignited before blasting off its launchpad at the Wenchang Space Launch Center in Hainan province on Friday. LIU JUN/FOR CHINA DAILY Right: The trajectory of the rocket lights up the sky over Hainan island early on Friday morning. The rocket is tasked with sending satellites into high-altitude orbits. LIU YANG/FOR CHINA DAILY

The 60.1-meter colossal rocket blasted off at 1:51 am from a launchpad in the coastal launch center, and soon deployed the New Technology Demonstrator 9 experimental satellite into orbit, according to a statement from China Aerospace Science and Technology Corp, the nation's leading space contractor.

The satellite is tasked with conducting space environmental monitoring and demonstration for new technologies.

The launch marked the 362nd flight of the Long March rocket series and also the second by the Long March 7A. Its first flight failed in March 2020 due to malfunctions.

According to the designers, the Long March 7A has a liftoff weight of 573 metric tons and a core-stage diameter of 3.35 meters. It is capable of placing a 7-ton spacecraft into geosynchronous transfer orbit.

The rocket is tasked with sending satellites into high-altitude orbits such as the geosynchronous transfer and inclined geosynchronous orbits. It can also be used to carry out missions to the moon, Mars or asteroids, designers said.

Meng Gang, Long March 7A's project manager, said the service of the Long March 7A will encourage and boost the development and deployment of large, heavy satellites.

He explained that along with technological advances in China's satellite industry, the nation's satellites, especially those operating in high-altitude orbit, will become heavier because they will have more equipment and more fuel.

However, the major Chinese rocket for missions to high-altitude orbit－the Long March 3B－has a maximum transport capacity of 5.5 tons to the geosynchronous transfer orbit, making it unable to lift next-generation high-orbiting satellites that usually weigh 6 or 7 tons. Meanwhile, the Long March 5, China's largest and mightiest rocket, can send 14 tons of payload into that orbit, but it will be a huge waste for such rockets to lift those satellites.

Therefore, a new model like the Long March 7A is necessary and useful, Meng said.

Fan Ruixiang, the rocket's chief designer, said that the addition of the new model will help to optimize the portfolio of launch services of the Long March fleet and will be a strong boost to satellite operators' plans to establish high-orbit networks.

"We have received many orders for the rocket that will need three to five launches each year from now to 2025," Fan said.