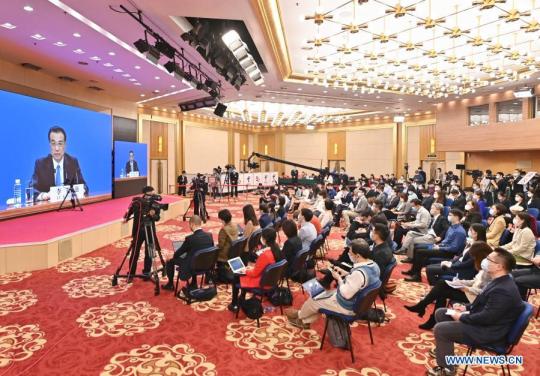 China will continue to take the initiative in opening wider to the world, and the country will remain a popular destination for foreign investment and a big global market through the widening of its market access, Premier Li Keqiang said on Thursday.

"The Chinese economy has become deeply integrated with the global economy, and shutting its door to the world will lead nowhere," Li told reporters in Beijing after the conclusion of the annual session of the National People's Congress.

He explained that China's ongoing efforts to foster a new development paradigm with domestic circulation as the mainstay and domestic and international circulation reinforcing each other mean parallel steps to boost the domestic market and expand opening-up.

China, out of its own interest, will continue to take the initiative to open wider, which will also benefit the world, he said. "The growing Chinese domestic market with rising domestic demand represents great opportunity for foreign products, services and investment."

Li pledged continuous efforts to uphold a multilateral trading system based on the rules of the World Trade Organization, saying that China will stay open and positive toward any multilateral or bilateral mechanisms that are mutually beneficial.

Li said the nation will continue to shorten the negative list on market access for foreign investors and further open its services sector.

He gave the example of China's eldercare sector, a huge market supported by the nation's elderly population of 260 million, saying that the sector will surely create more opportunities for products, services and investments from foreign businesses with its sheer size and openness.

Li said that the economic growth goal of over 6 percent set by the nation this year "is not a low target" as the government seeks to guide expectations to consolidating the foundation of economic recovery, promoting high-quality development and maintaining the sustainability of policies.

"By setting our GDP growth at above 6 percent, we have left possibilities open, which means in actual delivery, there may be even faster growth," he said.

Li said the country is keenly aware of the large uncertainty around the economic rebound in China as well as global economic recovery, adding that the modest target, which is well below the expectations of some economists and financial institutions, may be better aligned with the possibilities and conditions for what the nation can accomplish next year and the year after next.

"We must avert wild swings in economic performance because that will unmoor market expectations. Growth that is too fast would not be steady, and you need steady growth to sustain development for the long run," he said.

The premier underscored that there is no need for China to suddenly shift in macro policies this year, as the country ruled out the option of quantitative easing even under difficult circumstances last year.

With the economy on the track of recovery, Li highlighted the need for appropriate policy adjustments while continuing to extend support to market entities, especially smaller businesses, which are still reeling from the fallout of the downturn from COVID-19.

China has set a budget deficit target of around 3.2 percent of GDP, down from 3.6 percent last year, with 2.8 trillion yuan ($431.7 billion) of central government funding－compared with 2 trillion yuan last year－allocated directly to county- and prefecture-level governments for the purpose of supporting tax and fee cuts.

As the nation endeavors to stabilize its leverage ratio from the surge last year, Li also highlighted the need to encourage financial institutions to make reasonable interest concessions to make financing easier for smaller companies and lower their financing costs.