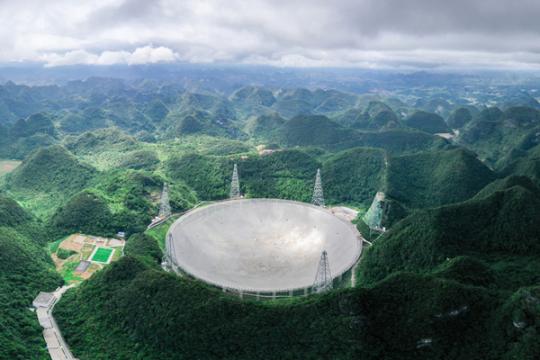 China will open the world's largest single-dish radio telescope to the international scientific community, according to the National Astronomical Observatories of the Chinese Academy of Sciences.

Starting on April 1, scientists from around the world can submit their research proposals online to use the Five-hundred-meter Aperture Spherical Radio Telescope in Pingtang county, Guizhou province, and observation periods will be distributed across various research projects starting from Aug 1.

There is currently no restriction on the proposals, but the telescope is prioritized to study topics including the interstellar medium composed of neutral atomic hydrogen, the polarization of spiral galaxies, and fast radio bursts-transient radio pulses caused by some high-energy astrophysical process not fully understood.

About 10 percent of the telescope's observation time will be allocated to foreign scientists during the first year of making the instrument available to the world, said Jiang Peng, FAST's chief engineer and deputy director of the telescope's operation and development center.

The telescope was launched in September 2016 and became fully operational on Jan 11, 2020 after several upgrades. Since its inception, China has envisioned the telescope as becoming a platform for international scientific cooperation to deepen humanity's knowledge of the universe, according to the Chinese Academy of Sciences.

Since the collapse of the 305-meter-diameter Arecibo telescope in Puerto Rico in December, FAST has become the world's sole megasized single-dish radio telescope.

Kejia Lee, a professor of astronomy at Peking University, said FAST is the world's most sensitive single-dish telescope, which will be crucial for making new discoveries. "It is truly a one-of-a-kind instrument," he said.

Lee and his team used FAST to observe a repeating fast radio burst called FRB 180301 and discovered that the radiation of the source has "very diverse polarization angle swings", meaning that the radiation is affected by the magnetosphere.

This supports the hypothesis that fast radio bursts originate from complex processes from the magnetosphere of a special type of neutron star-super-dense remnants of massive stars-known as magnetars, which are able to emit powerful magnetic fields, according to a study by Lee that was published in the journal Nature in October. However, there might also be other origins as well, scientists noted.

The origin of fast radio bursts has puzzled scientists for over a decade as they can blink and disappear within thousandths of a second, making them extremely elusive and difficult to study. Therefore, the discovery made by FAST and an international team of scientists was hailed as one of the 10 remarkable discoveries of 2020 by the journals Nature and Science.